THE PRICE OF DEATH 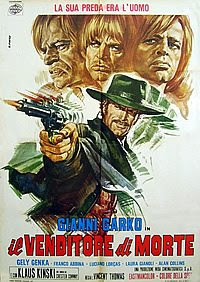 This week's forgotten or obscure spaghetti western is the 1971 movie 'The Price Of Death' which was written and directed by Lorenzo Gicca Palli.
The local saloon come gambling den is robbed by three masked men two of whom are killed by the leader.
Suspicion falls on the unlikeable Chester Conway (Klaus Kinski) who is found in possession of a fistful of bloodstained dollars. Conway claims to have an alibi but refuses to say where he was and with whom.
Fortunately, Conway's lawyer believes him and, so too, does the manager of the saloon who puts up the money for the lawyer to hire a private investigator.
Enter Mr Silver (Gianni Garko) who does the sort of things that private eyes do. He investigates and uncovers a nest of hypocasy while all around him the body count begins to rise.
Garko carries some of the Sartana character into his portrayal of Mr Silver while Klaus Kinski does most of his acting from behind bars.
What seems to have caused this western to 'disappear' is because of various purists - it didn't appeal to followers of the western and had none for those who liked private eye movies. Nor can I say that this movie was western noir but the mix made for an interesting movie.
Posted by Ray at 22:15

I've never seen this but it sounds interesting and I'll watch pretty much anything with Klaus Kinski in it. Damn good actor.