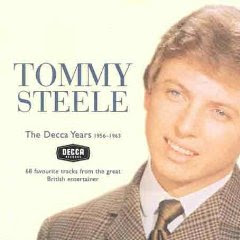 This week all my blogs will rotate around Tommy Steele.
He was born as Thomas William Hicks in 1936 in South London's Bermondsey.
Tommy Steele rose to fame in the rock 'n' roll era and played from time to time with Wally Whyton's skiffle group The Vipers.
While serving in the merchant navy he stopped over in America and heard the rock music that was growing over there with the likes of Buddy Holly.
Fronting a group Tommy Steele and The Steelmen he charted in the 1956 UK charts with 'Rock With The Cavemen' but it was his number one 'Singin' The Blues' that made his name. The previous week Guy Mitchell had reached the same position with the same song - but it is Tommy Steele's version that is remembered.
Tommy Steele showed his versitality by becoming an actor - playing himself in 'The Tommy Steele Story' and then such movies as 'The Duke Wore Jeans', 'Tommy The Toreador' and the musical 'Half a Sixpence'.
Songs from these films are included on the above CD along with some of the humourous songs like 'What A Mouth (What A North And South).
Singing is how most people remember Tommy Steele but this was a man who could turn his hand to anything. In the 1980s he wrote a novel called 'The Final Run' about the events leading up to Dunkirk. In Liverpool there is a sculpture of Eleanor Rigby - the sculptor was Tommy Steele.
He seems to have done a lot in his, currently, 72 years of life.
Coming up this week: A look at his movie 'Where's Jack?' and his autobiography 'Bermondsey Boy'.
Posted by Ray at 13:44

I look forward to your posts, Ray. Just hadn't realized quite how multi-talented this Londoner is. From the other side of the world, though, he is one of those people who from time to time have prompted me to ask "whatever became of. . . ?"