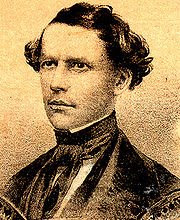 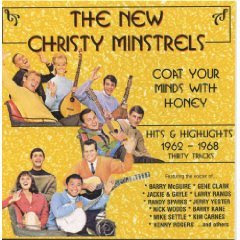 Edwin Pearce Christy (pictured right) was born in Philadelphia in 1815 and began his musical life in Buffalo, New York in 1842 where he formed a troupe of musical performers called The Christy Minstrels. These blacked up minstrels sang folk and negro spirituals to audiences at such New York venues as Palmo's Opera House and Mechanics Hall.
In 1847 they performed a benefit for Stephen Foster in Cincinatti, Ohio who was so impressed that he sold the song 'Old Folks At Home' to Christy for his exclusive use.
Edwin Christy retired from the group in 1855 but remained their manager. He opened up and managed several theatres in various cities that were known as 'Christy's Opera Houses' but the advent of the American Civil War made him fear that there would be financial problems ahead. As a result he committed suicide in 1862.
The Christy Minstrels did survive and continued to perform until 1921. The Minstrels provided a platform for the careers of some like Eddie Cantor and Al Jolson who played Christy in the 1939 movie 'Swanee River'.
Fast forward to the 1960s and the vision of Randy Sparks. Folk music was going through a come back with groups like The Kingston Trio and Brothers Four so it was natural to Randy Sparks to bring new life to this type of music. He formed the fresh faced The New Christy Minstrels around 1961 by combining his trio with that of the Inn Group with whom he cut an album 'Presenting The New Christy Minstrels: Exciting New Folk Chorus'. The album did well spending almost two years in the Billboard Chart and for which they won a Grammy.
Despite this success the Inn Group left the Minstrels and Randy Sparks went on the hunt for new performers. Amongst the new comers were Barry McGuire and Gayle Caldwell the addition of which would change the voice of the Minstrels.
Live shows were foot stamping, hand clapping affairs for the music was upbeat and when they appeared on stage, in 1965, at 'Sunday Night At The London Palladium' they gained a new audience from the UK.
By 1966 the group began to break up and new blood was brought in. Although they still played the old songs the Minstrels were moving in a different direction.
Like the original Minstrels so The New Christy Minstrels would provide a springboard to fame for some of it's members. Barry McGuire with a number one with 'Eve Of Destruction'. Gene Clark with The Byrds, Kenny Rogers and the First Edition and Kim Carnes of 'Bette Davis Eyes' fame. One singer, Karen Black, did not continue with this career but found fame in the movies 'The Exorcist' and 'Five Easy Pieces'.
The New Christy Minstrels though are best remembered for that period of the 60s when they produced songs like 'This Land Is Your Land', 'Green Green' and the comic 'Three Wheels On My Wagon'. And the folk songs about another time with 'Ramblin'' and 'The Drinking Gourd' a road map for slaves escaping from the South to the North.
The featured CD gives the listener a taste of The New Christy Minstrels but other CDs are around that are a bit more definative.

And I sure do remember those sixties and that group.

Quiz question - who wrote Three Wheels on My Wagon?
Clue - someone very famous.

Martin - you mean the chap who wrote a number of pieces for Dionne Warwick and covered by the likes of Cilla Black and Dusty Sprongfield? Only on 3 Wheels he had Bob Hilliard in place of Hal David.

Spot on, Ray! He's a great hero of mine, and I also think Bob Hilliard is much under-rated.
Incidentally, Eve of Destruction sourced the title of my fifth Harry Devlin novel.