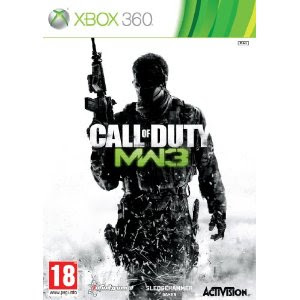 I have to admit that I have never played any of these games before - yet this has a massive following. Well, I assume that this is so as it says on the box 'The BEST-SELLING FRANCHISE in XBox 360 HISTORY is back'. Er - hold on I thought that claim was on the back of Call Of Duty: Black Ops.
Back to reality - this is a game for a laugh.

The story opens with Manhatten in the hands of Russian troops and you are a character called Frost attached to Delta Squad.
Part of the starting narrative sees your commander 'Sandman' in conversation. The moment the other says 'Good to have you on board, Sandman.' it sounds like we are in good hands.
Yeah?
Sandman spends all his time hiding in cover telling Frost to take out snipers, blow up towers, take out the enemy, blow up helicopters and gets narky if his orders aren't obeyed straight away.
I got so fed up with him doing nothing that I couldn't resist lobbing a grenade in his direction. I got the message 'Friendly fire will not be tolerated'.
Really?
Not like in real life, then.
And how about the rest of the team. Now they have - unlike Frost - unlimited ammunition as they wage war against all kinds of inanimate objects like computers, store shelving and anything else that doesn't move.
In short all the hard graft in this first person shooter is the player. Everyone else involved are a waste of space. So, it beats me when a section is labelled 'Mission failed you have lost contact with your team'. What team? I'm in front of them; all opposition has been wiped out and I'm at the objective.

You know, this could have been a good game.

Graphics - brilliant. Destroyed cities - Manhatten, Paris and Berlin. Yet another depiction of the destruction of the Eiffel Tower.
The storyline of a Russian defector trying to take back Russia and take on the world at the same time is quite gripping. You get to play two characters Frost and Yuri, a Russian defector.
Trouble is good graphics and storyline are not enough. For a good story you need characters that can be related to. The potential is there but not used.

To my mind Gears Of War 3 stands head and shoulders about this Call Of Duty offering because it has characters that can be related to and you can trust them to guard your back.
My suggestion to Activision is that they take this on board.

Now having completed the storyline I turn to the online version. There are enough people around that can be read who find that the online maps are giving nothing new.
It seems all anyone has to do is lie up in cover and use sniper scopes to take out the opposition. Reality is that no one understands the principles of attack or defence.

Next up is 'Call Of Duty: Black Ops 2' - if Modern Warfare 3 is anything to go by well it just isn't a great advert for this.
Posted by Ray at 23:14 No comments: