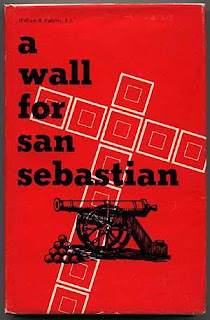 William Barby Faherty is a Jesuit priest who is also a historian. He has written many non-fiction works to do with the Catholic Church and its history.
As far as I know 'A Wall For San Sebastian' is his only fiction work.
Published in 1962 the book tells the story of a soldier who has become a Jesuit friar who's first post is that of the church of a small Mexican village.
When he arrives the villagers are in hiding and the village itself shows the signs of devastation that has followed in the wake of a Commanche attack.
The immediate needs are to repair the mission and prepare the village against further Commanche attacks. This he approaches as a soldier rather than as a man of God. As tension mounts so does the conflict within his own soul.
A very good character study without any sermonising about what is right - more to do with human nature.
The book was filmed as 'Guns For San Sebastian' about which I shall write next week. Although William Barby Flaherty did visit the set he was not happy with some of the changes that were made to the book but .......well, you'll have to wait for part two.
Posted by Ray at 08:58

Thanks, Ray. This is totally new to me.

And new to me also but the name rings a bell. But after looking it up I found I hadn't seen the Bronson/Quinn film either... looking forward to your part two.

I think that this is a really forgotten book - and hard to come by. The cheapest that I could find was £40 in UK money.