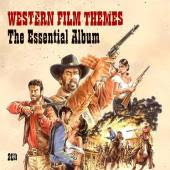 One important element in a film is the music. It sets the scene, heightens the tension and plays with our expectations.
Sometimes it is the music that is remembered rather than the film as in the case of 'Unchained Melody'. Or that piece of music that accompanies the London Marathon - Ron Goodwin's 'The Trap' - the main title theme to a film with Oliver Reed and Rita Tushingham.
The album featured - Western Film Themes: The Essential Album - is a good blend of film themes with some tracks appearing for the first time as far as I know. None of the tracks come from the original soundtracks but performed by the City Of Prague Philharmonic and The Philharmonia Orchestras and, in most cases, sound as though they came from the film.
Some of the titles are predictable like 'The Big Country' and 'The Magnificent Seven' and some not so like the theme to John Wayne's 'Stagecoach' and 'She Wore A Yellow Ribbon'.
Most composers are represented like Elmer Bernstein, Jerome Moross, Jerry Fielding, John Barry and Ennio Morricone.
If this album has a failing then it is in the reproduction of Morricone's music especially 'The Good, The Bad And The Ugly'.
Unlike other film music compilations this one has a few of the old TV themes 'The High Chaparral', 'Wagon Train', 'The Wild Wild West' and 'The Lone Ranger'. Modern TV themes are there with 'Lonesome Dove' and 'Monte Walsh'.
Over all this is a pleasent little 2CD album and for a fiver it's good background music - or just for sitting there and listening to.
Posted by Ray at 11:10

I've got the selfsame CD - had it from Asda I think.

As a kid I used to have lots of film soundtracks by Geoff Love. Great, they were.

Yes, Ray, I love these film themes. One of my favourites is Neal Hefti's Duel at Diablo. Another (1999) double CD is The Wild West - the essential western film music collection (Prague Phil again). Maybe yours is an updated version?

If this one is updated it left off 'Duel At Diablo' though I've got the original main title theme on an old LP. Must get them transferred to disc sometime.