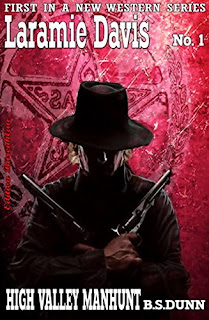 There are three more Laramie Davis available in this series - all available on Kindle or paperback
Posted by Ray at 22:27 No comments: 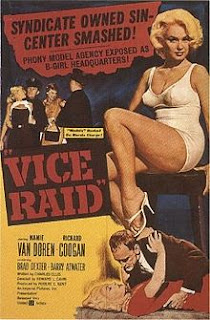 It was a recollection of a film poster that I had seen in a cinema foyer. I think it may have been in the Odeon, North Finchley. That poster had a pink background and a swim suited Mamie Van Doren in black and white.

Back then this film carried an X Certificate (adults only) so I never got to see it - until yesterday. Curiosity led me to a copy on You Tube and I quite enjoyed the 70 minute movie.

The movie was written by Charles Ellis and directed Edward L. Cahn for Imperial.

The story evolves around Sergeant Whitey Brandon's (Richard Coogan) attempt to bring down the vice empire of Vince Malone (Brad Dexter). Malone, however. has a plan to get rid of his adversary by employing an out of town model Carol Hudson (Mamie Van Doren) to frame the detective. The plan works and Brandon gets kicked off the force.

Brandon isn't done as he sets up business in opposition to Malone - in the process tries to enlist the aid of Carol Hudson but she's not interested as her younger sister Louise (Carol Nugent) has arrived for a visit.

Events take an ugly turn when Malone's lieutenant rapes and beats up Louise - which leads to the alliance of Carol with the cops.

Though the cast were largely unknown - except for Brad Dexter who was about to become part of the cast of an iconic western 'The Magnificent Seven' - this was quite an enjoyable, though predictable, movie.