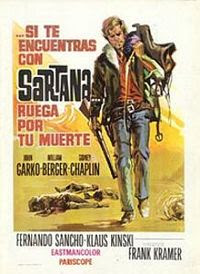 The spaghetti western maintained several series characters like The Man With No Name trilogy, the Sabata trilogy, Django and Trinity.
Probably the least remembered of these were the five Sartana films.
Gianfranco Parolini had liked the name Sartana who had been played by Gianni Garko in a film called 'Blood At Sundown'. But the Sartana movies have no connection to that one.
Parolini was a great James Bond fan and his vision for the character of Sartana was in the role as a kind of James Bond of the west.
Sartana (played in the first four movies by Gianni Garko) dresses in black and is a suave frequenter of the gambling tables. He is armed with a derringer with amazing stopping power, a watch and chain that are made of lead, a long range rifle, a Colt Peacemaker, cigars that are sticks of dynamite and a set of sharp edged playing cards that can be used Shuriken-style. Other 'gimmicks' crop up during the movies.
Parolini was only involved with the first movie and it impressed the producer Alberto Grimaldi who asked Parolini to direct the Sabata trilogy.
Direction for the remaining Sartana movies passed to Guiliano Carnimeo (aka Anthony Asquith) and George Hilton took over the role of Sartana in the final story in the series.
Sartana is not a character out for revenge or reward but for justice. He only kills those that he believes deserve to die. Despite this the movies boast a high body count.
Like Django, Sartana spawned several imitations that saw Sartana paired with Django.
The official series are:
If You Meet Sartana Pray For Your Death (1968)
I Am Sartana Your Angel Of Death (1969)
Have A Good Funeral My Friend - Sartana Will Pay (1970)
Sartana's Here - Trade Your Pistol For A Coffin (1970)
Light The Fuse - Sartana Is Coming. (1971)
The first movie was released as Sartana and the character has a cult following in Europe.
This series is out on DVD.
Posted by Ray at 11:35

You're right that it's least-remembered. I'd never heard of him before! Thanks for that.

I've only seen one Sartana film - don't remember which, remember enjoying it

I watched all five movies in a ten film set I gor from Amazon. Enjoyed them.

Thanks for that, Randy. I found two of the dvds in a charity shop and then I remembered the original movies.