IN MY SOLITUDE by David Stuart Leslie 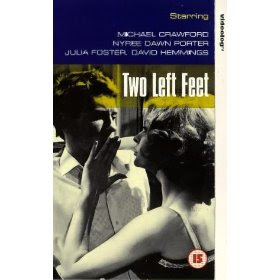 In My Solitude by David Stuart Leslie was published in 1960 and, later, in 1963 published by Pan Books as 'Two Left Feet' as a tie-in to the Michael Crawford movie.
Both the book and the author David Stuart Leslie should be better known for this novel is full of observational description of the period - the very early sixties.
The story is about nineteen year old Alan Crabbe who lives in the North London area known as Camden Town.
The story opens in the local cafe known as Joe's although the owner's name is Horace and despite the sign outside that says 'Regent Refreshment Rooms'.
A place of steamy windows, drab curtains like a funeral parlour and the kind of tables and chairs that get broken in saloon bar fights in cowboy films.
Into the cafe comes a new waitress, Eileen, who looked 'a bit like Ava Gardner at a quick glance, only younger, but with the same long dark hair'.
Eventually, they get together and Alan introduces her to his small circle and invokes scenes of teenage angst when one of his mates, Ronnie, takes a shine to her.
Into the mix comes Beth Crowley. Though sentimental, she is also tough in her approach to life - characteristics that Alan Crabbe lacks. But this story has a dark undercurrent that sees her father arrested for something that is hinted at - and like the hero it is left to the reader to draw their own conclusions.
Both relationships with Eileen and Beth are fated but leaves Alan with a different philosophy to life.
'In My Solitude' does not have just a good story to tell but is also character driven and it is observations of life at the time that makes this book worth reading.
What puts it amongst my favourites is the part where 'he'd write it all down......and it would look like a story'. Then 'Reading over what I'd written, it's made me realise how things changed......Elvis is swinging his pelvis in khaki and Raymond Chandler is dead. Everything changes so quickly it makes you wonder if it was worth all that sweat, learning the latest jive or the latest hit song when, suddenly, it's old fashioned and no one wants to know.'
Life goes on.
The movie was okay and if it came out on DVD I would get it - well, there are some performances by the Trad Jazz band Bob Wallis and his Storyville Jazzmen for starters.
My copy is old and tatty and well read and I still agree with the Daily Express comment 'Fings as they are. . . Fresh observation, no self pity, no phony sociology, rough and squalid, yet redeemed often by sardonic Cockney humour. A story as convincing as it is readable'.
Who could ask for more?
Posted by Ray at 00:59

I remember the film but hadnever heard of the book. Good call.

Somehow I missed this yesterday, Ray. I checked early but didn't see it. I'll add it on.