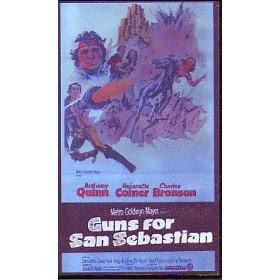 GUNS FOR SAN SEBASTIAN was a 'spaghetti' western made in 1968. It starred Anthony Quinn, Charles Bronson and Anjanette Comer.
Directed by Henri Verneuil to a script written by Serge Gance.
What made this movie different from other 'spaghetti' westerns is that it was filmed in Durango, Mexico rather than the usual Spanish locations.
The story is simple and set in the mid-1700s.
The outlaw Leon Alastray has escaped capture by the Mexican army and is given sanctuary by a priest (played by Sam Jaffe). When the priest is killed the villagers of San Sebastian, who are hiding in the hills, believe that Alastray is their new priest which Alastray strongly denies. Then a 'miracle' occurs and Alastray finds himself in a role that he does not want.
The village itself is under constant raids by a bunch of Yacqui indians led by Golden Lance and in an attempt to make peace Leon Alastray makes a gift to the Yacqui chief of a white stallion. Yet, all the while he is instilling in the villagers a belief in themselves.
Against Alastray is a half-breed known as Teclo. At first, his motives seem unclear but it soon emerges that he's all out for himself and persuades Golden Lance to return the stallion - and battle commences.
Anthony Quinn as Leon Alastray and Charles Bronson as Teclo give a good account of their roles. While Anjanette Comer takes the role of Kinita, Alastray's love interest who knows that Alastray is not a priest.
The strength of the film lies in the fact that the essence of the book 'A Wall For San Sebastian' remains within the film - maybe, that was why the author did not object too loudly at the changes - though the character of Teclo does not appear in that book but was added into the script.
Leon Alastray is a 'free spirit', an outlaw, a womaniser and likes his drink yet he is drawn into a world that reveals another side to his character and his role as spiritual adviser does not come easy.
'Guns For San Sebastian' has one of the finest Ennio Morricone scores that captures the atmosphere of the film.
Yet this movie has a cult following of its own and there is a small but growing demand for a DVD release. It gets regular showings on TCM though and, in my opinion, worth checking out.
Posted by Ray at 13:45

Will check it out. Am a big fan of Quinn and always felt Bronson was underrated.

Another one for the DVD recorder.