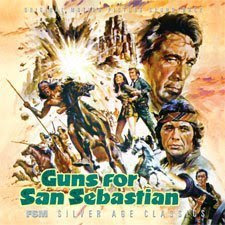 Ennio Morricone was born in Rome, Italy in 1928.
Influenced by his jazz trumpeter father, Mario Morricone, Ennio Morricone studied the trumpet, at the age of 9, at the National Academy of St. Cecilia where he went on to study composition and choral arrangements.
Morricone played trumpet in a jazz band and arranged songs for the Italian radio station RAI. Later he joined RCA where he was the music arranger for such artists as Rita Pavone and Mario Lanza. One success at this time was his composition 'Se telefonado' which has been covered several times - notably by Francoise Hardy.
In the 1960s he began to write film scores for some long forgotten movies like 'A Pistol For Ringo'.
These soundtracks though impressed a former schoolfriend, Sergio Leone, who asked Ennio Morricone if he would score the music for 'A Fistfull Of Dollars'. Budget restrictions meant that to augment the orchestration Morricone had to add sound effects like gunshots and whip cracks.
This score would lead to a collaboration with another childhood friend Alessandro Alessandroni who supplied the whistles and twanging electric guitar and Edda Dell'Orso.
Edda Dell'Orso was born in Genoa, Italy in 1935 and by the time she met Morricone she was at the height of her powers. It is her soprano voice that sings the wordless songs through tracks like 'Once Upon A Time In The West' and the haunting tracks on the Anthony Quinn movie ' Guns Of San Sebastian' and Deborah's Theme from 'Once Upon A Time In America'. Not all her songs are wordless 'Run, Man, Run' from 'The Big Gundown' is an example.
In most cases it is usual for the film score to be written after the movie has been made but with 'Once Upon A Time In The West' the movie was written to the film score.
Ennio Morricone is associated more with the western as with 'The Good, The Bad and The Ugly' and 'A Professional Gun' and 'My Name Is Nobody' but there are many other movies that bear his hallmark. This has ranged from the horror movie 'The Thing'; the fantasy 'Red Sonja'; the historical 'The Mission' and the prohibition era movie 'The Untouchables'.
Even the console computer games have not escaped his attention for 'Sacco and Vanzetti' forms part of the score for 'Metal Gear Solid' and he wrote the theme for Rockstar's 'Red Dead Revolver'.
In the passage of his career it is estimated that he has written in excess of 500 film and TV scores with 'Moses' amongst the latter. Also, he has inspired the music of other composers of the soundtracks to other spaghetti westerns.
In addition to his film music he has, since 1948, and still does write classical compositions. He has also conducted several orchestras including that of the National Academy of St. Cecilia.
Although nominated several times for an Oscar it was not until 2007 that Ennio Morricone won an Honory Academy Award that was presented to him by Clint Eastwood. BAFTA has awarded him the Anthony Asquith Award for Film Music on five ocassions.
In 2008 the French President bestowed Knight in the Order of the Legion of Honour on Ennio Morricone.
It is interesting to note that both Independant pro-wrester Eddie Kingston and heavy metal group Metallica have used 'The Ectasy Of Gold' from 'The Good The Bad and The Ugly' as their entrance music.
An interesting CD is 'We All Love Ennio Morricone' which contains Celine Dion singing a vocal version of 'Deborah's Theme'; Bruce Springsteen with 'Once Upon A Time In The West' and the Metallica 'Ectasy of Gold' as well as other artists like Quincy Jones and Andrea Bocelli paying their tribute to his influences.
Posted by Ray at 23:17

I love his soundtracks!

Ray, this is a facinating piece and I now want to dig through my music collection and give some of his soundtracks a spin.

A great piece - the good,the bad and the ugly is probably the most famous western theme ever - along with the mag 7 maybe.

He's one of the few composers I purchase. Just wonderfully operatic-cool music.

Before I went on the lam in 2001, I saw Morricone at the Barbican in london. It was magnificent. A real tingler!Smashing post.

will have to disagree with the most famous western theme ever, hands down that's 'once upon a time in the west'

My dream came true when i saw him in san marco piazza in venice!