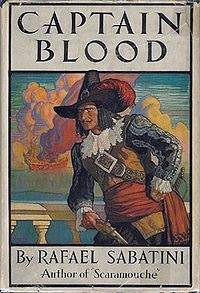 Rafael Sabatini was born in Jesi, Italy in 1875 and died in 1950
Captain Blood was first published in 1922 and quite by luck was able to find the cover of the original novel.
Peter Blood is an Irish doctor who gets caught attending to a wounded soldier by the notorous Kirke's Dragoons in the aftermath of the Monmouth Rebellion. Despite his protests he is arrested and dragged off to Bridgewater where he faces 'The Bloody Assizes' at the court of Hanging Judge Jefferys.
When found guilty Peter Blood escapes the noose but ends up being transported to the West Indies.
Blood is sold into slavery but is spared through the efforts of Arabella Bishop, the niece of Colonel Bishop the Governor's second in command. As a doctor, Peter Blood, is allowed to treat the sick while attending the needs of the wealthy.
With a certain amount of freedom Peter Blood begins to make plans about attempting an escape but this gets scuppered when one of the principle parties gets whipped almost to death. However, the Spanish fleet turn up to raid the British Colony and Peter Blood and some of the other slaves get together and capture the pride of the Spanish navy the 'Cinco Llagas'.
From this moment on Captain Peter Blood takes command, renames the ship the 'Arabella' and becomes the scourge of the high seas.
Books about pirates are few and far between and despite its age 'Captain Blood' must rank as THE best. The very character of Peter Blood could only be written for Errol Flynn to play though the book was published when he would have been about 13 years of age. But Flynn did play the part in the 1935 movie.
Rafael Sabatini wrote two more books - 'Captain Blood Returns' and 'The Fortunes Of Captain Blood' - that shed more light on incidents and other adventures within the framework of the original book.
Some historical notes: The Monmouth Rebellion took place in 1685 when James, 1st Duke of Monmouth (an illegitimate son of King Charles the Second of England) attempted to overthrow King James the Second. The attempt was crushed at the Battle of Sedgemoor.
In the aftermath Colonel Kirke and his dragoons were charged with rounding up the rebels and executing as many as they could.
Judge George Jeffreys, Baron of Wems, known as the Hanging Judge was the Lord Chief Justice and had charge of what was to become known as the 'Bloody Assizes'. It is said that as many rebels were hanged as those who were 'indentured' into labour by transportation.
Judge Jeffreys died in 1689 of kidney failure after going into hiding after James the Second fled the country. In the book 'Captain Blood' Peter Blood diagnoses the kidney problem from the dock in an attempt to prove that he is a doctor.
Posted by Ray at 14:47

This must be serendipity. I've just checked out two books on pirates and have them on my TBR pile. I'd already decided to read Treasure Island (for the first time) this summer as part of my summer reading schedule. I'm adding Captain Blood to the list since, as you write, it's THE best. Thanks.

I love this story, both book and film (Errol Flynn). A definite must read IMO.

A true forgotten title. Thanks for writing about it.

Captain Blood was one of my mother's favorite films (big Flynnn fan) and I've seen it many times. The final duel is a classic. Sounds like the book is even better.

Good overview, Ray, and history lesson. I haven't got this, but have Sabatini's The Sea Hawk and Scaramouche, both of which were also made into films; they're in my vast TBR section. Clearly, I'll also have to look out for Captain Blood too! (Among several projects, I've started writing a pirate novel tentatively entitled Dark Endeavour, and I think it will be fun; the research is interesting too!) Thanks for that, Ray.