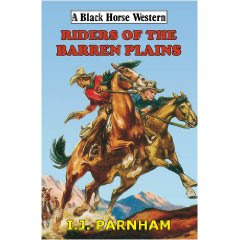 RIDERS OF THE BARREN PLAINS
by
I J Parnham
A Black Horse Western
Publication: 31st July 2009
Jeff Steed rode into Carmon looking for work, but when he got caught up in a bank raid he found himself running from both Cassidy Yates and the bank raider Blake Kelly. To escape from the net that was inexorably closing in on him he assumed the identity of a dead man. But as that man was the leader of a supply convoy he had to undertake the hazardous journey across the Barren Plains to the silver miners at Bleak Point. With the convoy escorted by the lawman who was trying to catch him and the bandit he double-crossed hiding out in the Barren Plains, can Jeff ever hope to survive?

I J Parnham was one of the first four Black Horse Western authors that I read following my stroke and that novel was his first 'THE OUTLAWED DEPUTY'. It was, also, the first book to feature the lawman Cassidy Yates a character that has returned several times since. I found the style and storytelling easy on the eye so when, a few years later, a copy turned up on Ebay I bought the book. Much to my surprise it was signed and came from the author himself.

Just recently I had read 'DEVINE'S LAW' - in fact a review of this book was posted at The Tainted Archive. Quite a coincidence that the two of us should be reading the same book at the same time.

Jake T. Devine is not the nicest of lawmen. As soon as the reader meets him he guns down the unarmed family of Seth Randell - but it is the eldest son Max who he is really after. Jake T. Devine has been hired by former sheriff, Roy Cowie, now Mayor of Carmon to sort out the problem that Max Randell poses. Into this mix comes a lawyer from San Francisco who turns out to be Roy's estranged son, Gabe. Gabe's older brother, Frank, is the law and with a sense for justice Gabe becomes his deputy and joins Devine on the hunt for Max Randell who holds a key to secrets and blackmail that no one wants him to use - you think.

In the character of Marshal Jake T. Devine the author has built not only his best character but a man who is a law unto himself. He kills to survive after all as he says 'not many lawmen live to get old'. He contrasts so well with the younger well-meaning Gabe Cowie who the reader sees as the 'hero'. Again, Devine points out an arguement that Cowie has no 'experience'. This raises the issue of age and experience and the cynicism that comes with it vs youth and a lack of knowledge of life.

Again, this is one of those books that keep you guessing and all the motives, ulterior and otherwise, of the characters are revealed at the end. Whichever way you look at it 'DEVINE'S LAW' is one good read.

I'll try to pick a copy up when I'm back in Blighty in the summer.

Thanks for that, Ray. I just wrote out a reply explaining some of my thoughts on what I was trying to do with Devine and the problems of finding another story for him, but it got a little lengthy. I think I'll get my thoughts in order on him and post up a small article on my blog some time soon. Thanks again!

On the strength of 'Devine's Law' - I agree he is a character that deserves another outing.

And Joane Walpole is also reading Devine at the moment and she told me she was enjoying it. GUess Ian has to bring him back for another blood splattered outing.

Yes, I'm about 3/4 through and eager to find out what it's all leading to.

Reckon I'm gonna have to find a copy of this one.