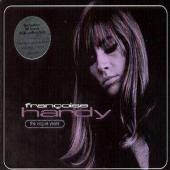 Bonjour - and that's all the French you are getting out of me.
Francoise Hardy was born in France in 1944.
A friend of my sister had a whole bunch of records that she had bought in France while on holiday. As I was the only one with a record player they had to play them in my room. There were singers like Johnny Hallyday and Sylvie Vartan but what stood out was one voice and that was the one that belonged to Francoise Hardy.
Her singing career began in 1963 with a recording of 'Oh Oh Cheri' but it was the flipside 'Tous les garcons et le filles' that became the first hit for her.
The same year she starred in a Roger Vadim movie called 'Chateau en Suede'.
She went on to appear in several other movies: 'Une Belle au coeur' (1965), What's New Pussycat' (1966), 'Masculin Feminin' (1966) and 'Grand Prix' (1967)
The featured CD is a 2 CD set titled 'The Vogue Years' and includes the song that took her to 5th place in the 1965 Eurovision Song Contest 'L'Amour s'en va' along with the 1965 hit 'Et Meme' and 'All Over The World'.
Back in the Sixties one of the cheap labels brought out a double LP titled 'Francoise Hardy en Anglais' which had all her good songs sung in English. I discovered from that 'Je veux qu'il revienne' translated simply to 'Only you can do it' - this was odd because that was the chorus that I sang along to it.
What has always attracted me to Francoise Hardy, besides her looks, is that husky, innocent sounding voice that makes the French language musical.
Although she went into semi-retirement in the early nineties she returned in 2000 with a new album 'Clair Obscur'. And over the last few years has dueted with the likes of Carla Bruni and Iggy Pop - with the latter there is a brilliant recording of 'I'll Be Seeing You'.
Just recently I heard her singing 'La Mer' on the radio and I thought to myself that her voice was timeless - it is as good today as when she first sang 40 odd years ago.
Posted by Ray at 15:56

Brilliant choice. An older brother had the lp.'s on marble arch records.

Marble Arch - the name I just could not recall. Thanks Paul.

Wow. Never heard of her before. Thanks for filling in the blanks.

Just ordered the cd on Amazon.