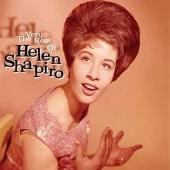 Imagine this a gang of boys on their way home from school belting out 'Don't Treat Me Like A Child' like it's an act of defiance.
Then imagine the shock that followed in the wake of discovering that the singer wasn't a twenty-something but a kid like us.
That number 3 hit in 1961 was recorded by a 14 year old schoolgirl from the Clapton area of Hackney, North London - and boy could she sing.
Even Norrie Paramour (who had signed the likes of Cliff Richard and The Shadows) couldn't believe that she was so young when he heard her tapes.
If we doubted that she was a schoolgirl well there she was, in black and white moving pictures, standing outside her school gates looking a bit awkward and shy as the newsreels interviewed her - and almost dismissive about her sudden success.
Helen Shapiro was born in 1946 in Bethnal Green in London's East End and was still wearing her Clapton Park Compreshive school uniform, with her satchel slung over her shoulder, when she went to Norrie Paramour's office to sign the contract.
From 1961 to 1963 she was set to dominate the charts with two number ones - 'You Don't Know' and 'Walking Back To Happiness' and a number two entry with 'Tell Me What He Said'.
Despite two film appearences in 'It's Trad, Dad' and the Billy Fury movie 'Play It Cool' Helen Shapiro's career went on the wane.
On one tour where she headlined the show her support act was an up coming little foursome known as The Beatles. They got on so well together that The Beatles penned 'Misery' for her. Instead of seizing the opportunity EMI decided not to let Helen Shapiro record it - thus denying her the opportunity to be the first artist to cover a Beatles song.
Another lost opportunity was when Helen Shapiro recorded an album in Nashville. One of the tracks was 'It's My Party' which EMI sat on until it was released by the unknown Lesley Gore who took it to number one.
Looking back though there were a number of ways that Helen Shapiro could have gone in her career. Even now when I listen to her sing jazz with 'The Birth Of The Blues' or 'Basin Street Blues' or the very blues inspired 'A Teenager In Love' - hell, that teenager could sing the blues.
Whichever way you look at it Helen Shapiro could sing with an unbelievable maturity.
The featured CD is a double album with 40 of her best tracks including her chart hits and is a nice mix of styles.
Helen Shapiro continued to sing around the cabaret circuits until she retired in 2000 -but then you don't forget the greats.
Posted by Ray at 21:42

I will look her up. She sounds amazing.