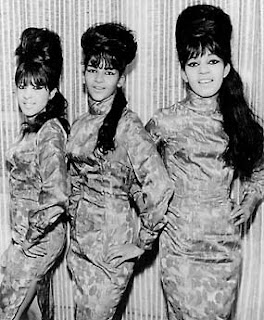 With their black beehive hairstyle and thick black eyeliner The Ronettes changed the face of the girl groups.
Their appearence in the UK on the 1964 tour with The Rolling Stones produced what was close to hysteria - something that had never happened before. Headlines, at the time, reported ' Girls screamed at The Stones - boys screamed at The Ronettes.'
The Ronettes were worlds apart from the girl groups of the time like The Chiffons and The Shirelles - they were raunchy and sexy and their style was their own.
So who were The Ronettes - they were sisters Veronica (Ronnie) and Estelle Bennett and their cousin, Nedra Talley from Spanish Harlem, New York who had, in 1959, won an amateur talent contest at the Apollo Theatre as The Darling Sisters. But it was in 1961 when their career took off and that was because they were mistaken, while standing in a queue at Joey Dee's Peppermint Lounge, for a girl group that was supposed to appear there that night. After wowing the audience with their rendition of the Ray Charles hit 'What'd I Say' they were rewarded with a regular spot at the club and a recoding contract with Colpix.
Besides providing vocal back up to the likes of Bobby Rydell, Del Shannon and Joey Dee they cut two singles 'I Want That Boy'(as Ronnie and the Relatives) and 'I'm On The Wagon' (as The Ronettes) as well as an album's worth of other tracks that did not see the light of day for many years.
But it was their association with Phil Spector that was to make their name with the release, in 1963, of 'Be My Baby' which reached no4 in the UK charts. While their follow up 'Baby, I Love You' only charted at No 11 it was a big recording in another way. The backing was provided by Darlene Love, Cher and Ronnie with their voices over-dubbed so that it sounded almost like a choir and coupled to this was a pure wall of sound that took it to a loud rocking ballad. The kind that made you want to turn the volume up - and up.
While on tour in the UK they released 'The Best Part Of Breaking Up' and finished the year with 'Do I Love You' - but the time of the girl groups were beginning to fade.
Almost anticipating this Ronnie Spector went solo with 'I'm So Young' and 'Why Don't They Let Us Fall In Love' but both were pulled. Instead, Spector released The Ronettes singles 'Walking In The Rain' that won Spector's only Grammy - for the sound effects.
1965 saw the release of 'Born To Be Together' and 'Is This What I Get For Loving You' while in between they provided backing for the Righteous Brothers hit 'You've Lost That Loving Feeling'.
Their last recordings were made in 1966 with 'I Can Hear Music' which became a later hit for The Beach Boys and 'You Came You Saw You Conquered' - in the UK they were released as the A and B side of the same disc. The group disbanded following the marriages of Estelle and Nedra.
In 1968 Ronnie married Phil Spector who tried to keep her career going - but that ended in divorce in 1973. However, she stills records.
The one thing is that despite the low chart positions for songs that deserved to do a lot better than they did - The Ronettes still remain remembered as the best girl group of their time and are still played, frequently, on the radio.
They made it into the Music Hall Of Fame in 2007.
Sadly, Estelle Bennett died on the 13th ebruary 2009.
For more info on The Ronnettes - then read 'Be My Baby' by Ronnie Spector.
Recommended CDs: The Ronettes featuring Veronica - these are the Colpix recordings
The Best Of The Ronettes - which includes Ronnie Spector's two solo recordings and the independent 'I Wish I Never Saw The Sunshine' together with all their hits.
A Christmas Gift For You - which includes The Ronettes singing 'Sleigh Ride', 'I Saw Mommy Kissing Santa' and 'Frosty The Snowman' recorded in 1964
Posted by Ray at 13:55

MY very favorite and I can sing every word: Be My Baby.

Love their sound and Spector's Wall of Sound, a technique that later influenced ABBA (according to Benny Anderson and Bjorn Ulvaeus). Their version of I Saw Mommy Kissing Santa Claus is still my favorite.

I have all the recordings - vnyl and CD. And had posters on my door.

I became an instant fan after Ronnie's duet with Eddie Money on "Take Me Home Tonight" and then bought the BEST OF. I first heard "Be My Baby" during the opening credits to MEAN STREETS. One of the best openings ever. Thanks Ray. I'm heading to YouTube now...