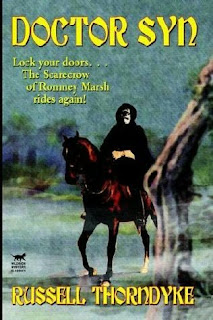 As you walk up Mill Road in Dymchurch, Kent and just before you reach Doctor Syn's Guesthouse you come across a pair of semi-detached cottages the first of which is the house where Russell Thorndike lived.
Arthur Russell Thorndike was born in Rochester, Kent in 1885 and became a British actor and novellist. He was the brother of Dame Sybil Thorndike with whom he appeared on stage several times.
1915 was to see the publication of his first novel 'Doctor Syn'. The novel centred around the mild mannered Vicar of Dymchurch, Christopher Syn - a Doctor of Divinity - who is concerned with the sudden arrival of the Excise men hunting the 'Marsh Men' a bunch of smugglers that ply their trade on Romney Marshes. With them they bring a mulatto, a man who can identify a former notorious pirate known as Captain Clegg who, it was thought, had been hanged at Hythe just years earlier.
It is not long before the reader discovers that the vicar is that very pirate and that he is also the notorious Scarecrow the leader of the smugglers. The Scarecrow rides a black horse named Gehenna that is kept in an underground stable on the Marshes.
During the first world war Russell Thorndike was wounded at Gallipoli and discharged from the Army. Despite his spinal injuries he returned to the stage where he rejoined his sister at the Old Vic. In 1922 he was praised in the first professional performance in Henrik Ibsen's ' Peer Gynt' and for the silent film version of 'MacBeth' with Dame Sybil as Lady MacBeth.
He, also, played the part of his creation Doctor Syn in a stage production of the book.
Writing, it seems, gave him a lot of pleasure for in 1924 he wrote a play called 'The Tragedy of Mister Punch: A Fantastic Play In Prologue And One Act'.
In 1927 Russell Thorndyke returned to writing books amongst which were six prequals to the original Doctor Syn novel. These were:
Doctor Syn On The High Seas (1935) a swash buckling adventure that recounts how Christopher Syn became the notorious pirate, Captain Clegg.
Doctor Syn Returns (1936) an account of how Christopher Syn returned to Dymchurch during the great storm of 1776.
The Further Adventures of Doctor Syn (1936)
Courageous Adventures of Doctor Syn (1938)
The Amazing Quest of Doctor Syn (1939) - an unusual tale where Dr. Syn goes to the aid of smugglers in South Wales.
The Shadow Of Doctor Syn (1944) which leads the reader back to the original 'Doctor Syn' novel.
Between 1927 and 1949 he produced nine other novels but none are as well known as the Dymchurch novels of Doctor Syn.
The 1940s saw Russell Thorndike return to the screen playing minor roles in the Laurence Olivier productions of 'Henry V', 'Richard The Third' and 'Hamlet'.
Three movies were made featuring Doctor Syn.
The first was 'Doctor Syn' (1937) where the title role was taken by George Arliss. It was that actor's last film.
In 1962 there was the Disney version with Patrick McGhoohan in 'Doctor Syn, Alias The Scarecrow'.
The same year Peter Cushing took the role in the Hammer production 'Captain Clegg' - but a legal wrangle with Disney forced Hammer to change the name from Syn to Blyss. This movie was also known as 'Night Creatures'.
Russell Thorndike died in 1972 - but it is the author that I remember and his style of writing made the stories of Doctor Syn so real.
So real that upon entering the church in Dymchurch and you look down the list of Vicars there is a gap between 1776 and 1793 the years covered by the books. 1776 the year of a great storm that tossed a boat over the sea wall demolishing part of the Ship Inn. A storm that cost the life of Dr Syn's predecessor who tried to save survivors of the shipwreck.
The village of Dymchurch has a 'Day Of Syn' every two years (the next being in 2010) to celebrate the connection with the books - and 'The Scarecrow' is always there.
But walk along the beach on a moonlit night is that really the lapping of the waves you hear - or is it The Scarecrow pounding through the waves urging his black steed with a cry of 'On - on, Gehenna'.
Posted by Ray at 12:09

Intresting post, Ray. I'll have to try and find this.

Yes, I remember these - I had the set once; not now, alas. Thanks for reminding me, Ray. Another excellent overview.

Good post. I've read the first novel, Doctor Syn, even the disney novelization by Vic Crume, but none of the others.
I see they are more readily available than they used to be, so I may need to start hunting them up.

I read all these novels and greatly enjoyed them.

I reviewed the first one on my blog, here: http://pulpfan.livejournal.com/2753.html

Do you know anything about his other novels? Are any of them also swashbuckling adventures, in the same vein?

Harp Of Hyperion - I never read any of his other books but not for the lack of trying. For these books were hard to find - even the library could not find a copy (and this was back in the early sixties.

Nik - I had the full set too until they fell apart.

David and Archavist - In my opinion this is a series worth finding. I don't think either of you would be disappointed.

Randy - The Disney movie was made up of segments from three Doctor Syn novels. Though with Disney it did have that 'feelgood' factor and avoided the darker side of Syn.