Friday's Forgotten Books - Up The Junction by Nell Dunn 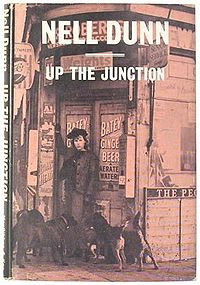 Nell Dunn was born in London in 1936 and her novel UP THE JUNCTION was published in 1963.
The book is not so much a novel but a series of sketches or short stories that link together to tell the story of two sisters, Rube and Sylvie, who work in McCrindles Sweet Factory up London's Clapham Junction.
It is also about Lily - a rich girl from Chelsea - who seems to be unpretentious as she fits in with the girls that she befriends.
Each section of the book is raw and real with the coarse colloquial speach of the time.
These are people who live for the day getting by on their wits as they work all day, buy on HP and avoid the tally men and their debts. Against this background are stories of petty theiving, cheating wives and the after effects of an illegal back street abortion. Even so there is genuine humour tucked away in there - some of which is dark. And tragedy - for this is a book about life and just, as there is in real life, not all endings are happy.
At the time it was written Up The Junction was considered controversial as did The Play For Today adaptation in 1965. The 1967 movie fared better but then there was a lot of the insight of the novel missing.
Nell Dunn was married to Jeremy Sandford who wrote the controversial 'Cathy Come Home' and 'Edna, The Inebriate Woman'.
Posted by Ray at 23:04

Not to forget Squeeze's song:

I never thought it would happen with me and that girl from Clapham.

The movie version is starting to ring a bell. Nell Dunn is definitely on my radar now. Thanks.