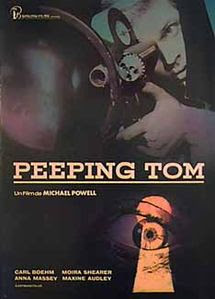 In 1960 this film killed the career of respected film director, Michael Powell. It was described as 'sick' and 'nasty'. Yet just over a decade later and through the efforts of Martin Scorcese the film has become a work of 'genius' and receiving the critical acclaim that it should have done in the first place.
'Peeping Tom' has been described as the British 'Psycho' and comparisons made.

What makes 'Peeping Tom' different to other movies is that the protagonist is a serial killer. Everything that you see is through his eyes and the lens of his camera. In turn that makes the audience to this film - the voyeur (another term for peeping tom).

Mark Lewis, played by Carl Boehm, is a solitary man. He lives in his late father's house and pretends that he is a tenant like the downstairs tenant Helen (Anna Massey) and her ailing mother. Helen builds a close relationship with Mark who shows her home movies that his father had taken. These movies are not of the happy family variety but of Mark's father abusing him by striking fear into him. Dr Lewis is investigating the psychology of fear on his own son.
Dr Lewis and the young Mark are played by the uncreditted Michael Powell and his own son Columba.
As an adult Mark is part of a film crew and has ambitions to become a film maker in his own right. He is never without a camera and explains, to anyone who asks, that he is making a documentary.
Then one of the actresses on the film he is working on is murdered and the police get involved.
But the scene for the whole movie is set right at the beginning. Tension mounts as Mark, carrying a concealed camera, meets a prostitute and the camera follows her into her house where she is murdered. The opening credits roll as he sits back and watches his new home movie.

Carl Boehm is excellent as Mark Lewis, a role that makes Hannibal Lecter seem docile.
Get a copy of the DVD to see what I mean.
Cinema in the Sixties were moving in all sorts of directions and somehow Leo Marks' script managed to combine 'kitchen sink' with the thriller and horror genres. Yet the movie virtually disappeared after it received bad reviews. However, due to the efforts of Martin Scorcese 'Peeping Tom' reached a wider audience in the US but not in Britain where the film was made.
Posted by Ray at 15:59

Briliant and a very British film with some top cameos.