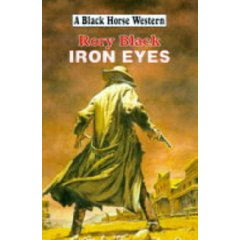 Iron Eyes is not your usual western hero.
"The man had a haunting face that hid beneath long, limp, black hair. He wore a battered, weather-proof coat favoured by long riders and road agents which almost reached his spurs. With each stride the sound of bullets clinking together in his deep pockets filled the room.
This was no normal man. This was an evil spirit who had yet to die and seek refuge in Hell."
This is the legendary bounty hunter known simply as Iron Eyes.
I asked Black Horse Western author Michael D.George, who writes as Rory Black, how he created the character of Iron Eyes. There was this blood spattered saloon and suddenly Iron Eyes was there.
And when you read that opening chapter you get that feeling that no one else but Iron Eyes could have wreaked all that havoc.
Iron Eyes made his first appearance back in 1999 and 10 years on is still plying his trade as a bounty hunter in the 12th book 'Iron Eyes Makes War'.
A journey that has involved Iron Eyes in the events at the OK Corral and taken on Mexican bandits all within his stride. A character that has grown along the way.
I'm not sure why this spectral character with his scarred up face and emaciated figure proves to be so fascinating. It would be easy to say that there is something there that harks back to the days of The Piccadilly Cowboys but then there are elements of the 'traditional' western there as well. And another ingredient that I just can't put my finger on - just that something that says that there is a new 'Iron Eyes' book and I've got to get it.
Rory Black's Iron Eyes novels are published by Robert Hale Ltd's Black Horse Western brand.
"As Iron Eyes spurred his mount, the long black hair beat up and down upon his collar.
It was like the flapping of bat's wings."

Reviews of the third and twelfth books in the series -'Spurs Of The Spectre' and 'Iron Eyes Makes War' - can be found on the blog Western Fiction Review (there is a link on the side panel).
Posted by Ray at 09:50