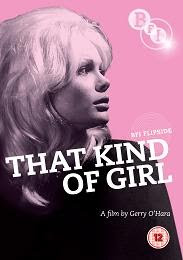 THAT KIND OF GIRL was a 1963 black and white movie directed by Gerry O'Hara that was made over a period of three weeks and cost just £23,000 to make.
Just released on to DVD by the British Film Institute.

The story is quite simple with Margaret-Rose Keil playing the part of an Austrian au pair Eva who is a Brigette Bardot look a like - all blonde beehive and a figure. She lives with a middle class family who find her delightful but fear that men will be after her for only one thing.
Librarian, Max meets Eva while handing out leaflets for a CND Ban The Bomb march. They meet up again at a jazz club where Eva tries to teach him how to twist. All this is watched by a predator, Elliot, who is old enough to be her father. Elliot gets to her first by getting her drunk and taking her to a strip club.
Despite her dalliance with Elliot she joins Max on the Ban The Bomb march and they share a kiss and cuddle at a stop off at the village hall - but that's all.
However, Eva - who is not dressed for a long march - decides to go home and misses the bus. Not to worry though as University student Keith comes along in his sports car and gives her a lift.
Keith is having problems with his girlfriend, Janet. Her parents have ruled out any chance of them getting married. So he takes time out with Eva who gives him a little comfort and joy.
Seeing the two of them together, Elliot, gets all uptight and jealous. On her way home she is attacked by Elliot who runs away when the local bobby on the beat (this is an old film remember) disturbs him. Taken to the local police station Eva is too shocked and scared to name her assailant to the sensitive WPC - who suggests that she gets a medical check up. Eva is sent to a 'Special Clinic'.
Meanwhile, a guilty Keith confesses all to girlfriend Janet who, determined to keep her man, decides that it is time to give him what he wants. Not the easiest of scenes as it is quite tense and cold.
Whoops! In no time at all she discovers that she is pregnant - but....
Meanwhile, jealous Elliot is maintaining a barrage of indecent and threatening calls at Eva who finally tells the police all. They tap the phone and Elliot is caught red handed (those were the days).
Back to the but....
This was a B-movie that was shown in the cinemas back in the early sixties but it contained a 'public information' message. This was about promiscurity and VD (venereal disease) or STDs in today's language.
Eva gets it from Elliot and possibly passes it on to Max by kissing and Keith through sex. In turn there was the possibility that it could be passed on by touching like it was contagious and could affect Janet's baby.
Cue one scene at the 'Special Clinic' where the statistics and what could happen to you are explained at great length.
It was meant to shock - but it jars against the storyline as there was enough in the film as Max and Keith are brought in to the clinic. Talk about sledgehammers cracking nuts.
Certainly, 'That Kind Of Girl' is one of the better examples of that kind of film. Of one thing that I was certain about was that Eva was not that kind of a girl.

You might want to back track to my take on 'The Yellow Teddy Bears'. A cautionary tale of similar ilk.
Posted by Ray at 13:52

I'll watch out for this one. The social history/documentary aspects sound interesting, though the cautionary-tale elements sound a little overblown. The VD and pregnancy scares were probably past their peak at the time of the movie's making. A Keith who drives around the English countryside with girlfriends in a sports car sounds very familiar. It was still quaintly referred to as "courting".

And it comes with a load of extras including a documentry about the CND Ban The Bomb marches.