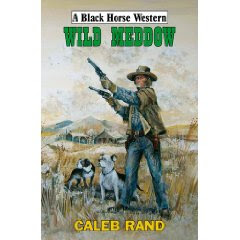 "It was late autumn, and Ben Finch was hunting for meat along the uninhabited snowline of the eastern Ozarks. He was checking his trapline, alert for a deer. His eyes were relaxed as they scanned the fresh, lightly drifting snow, then suddenly sharp,when a figure appeared stark against the drift of pure whiteness."
So opens Abe Dancer's first Black Horse Western 'IRONHEAD' first published in 2001.
Not his first western though for the writer Carl Bernard first appeared with 'GLASS LAW' by Caleb Rand.
Both Abe Dancer and Caleb Rand are anagrams of Carl Bernard.
The western novels by this author stand out for the stunning covers that he supplies. They have the look of watercolour sketches and are, probably, the work of his illustrator wife Raphilena. Therefore, the covers fit the books.
Both writers have an easy style of writing that keeps the reader interested - and those styles bear a lot of similarity but that is not a detraction. I say that because the cover pictures are easy on the eye and the words seem to reflect that.
Whichever way you look at Abe Dancer and Caleb Rand deliver a complete package.
Descriptively, these books give a good sense of time and place.
The first book that I read was 'BLOOD LEGS' by Caleb Rand (2004) who introduced me to Dan and Will Glass who first appeared in 'Glass Law' 'Blood Legs' was a simple story of two men riding into town after a long trail drive who get caught up in a gunfight and wind up in the cells after being mistaken for members of the notorious Blood Legs gang. How they get away and clear their names was quite involving but enough for me to buy the book and many more besides.
The book pictured is 'WILD MEDDOW' by Caleb Rand and will be published by Robert Hale Ltd's Black Horse Western banner at the end of February.
Grab a copy if you can.
Posted by Ray at 01:23

This is an interesting post, Ray, and worthy of comment. I've got his The Landbreakers which was good, providing more than found in the 'usual' western.