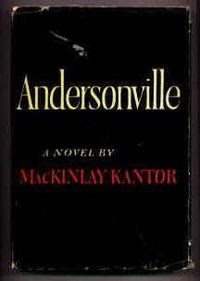 This 1955 novel about the Confederate Prison Camp at Andersonville, Georgia won the author, MacKinley Kantor, the 1956 Pulitzer Prize.

This novel is epic in scale on the same sort of level as 'War And Peace' and just that tad difficult to read - yet worth it.

The novel itself is a blend of fact with fictional as well as factual characters. And the book opens before the camp is constructed and see John Winder's survey and eventual construction of the stockade.
Then there is Henry Wirz, the camp commandant. A man who has been wounded and is still healing; unable to deal with the day to day running of the camp. He is also hampered by a Government that has no interest in the Union prisoners (which would top at 45,000). There are no medicines for the prisoners let alone the Confederate troops guarding them. No proper sanitation - just four acres of bog covered with excrement that stank to high heaven.
MacKinley Kantor drew heavily on the memoirs of former prisoners of war like John McElroy who wrote the biased 'Andersonville: A Story Of Rebel Military Prisons' and diarist John Ransom who recorded his capture, imprisonment and, eventual, escape. Both men appear in this book along with Boston Corbett, the man who killed John Wilkes Booth.
As I have said Andersonville lack sanitation and shelter. Open ground where a wild bunch known as the 'Andersonville Raiders' led by the real life William Collins prey on the other prisoners. Eventually, other prisoners fought back and this group called Regulators would hold the Raiders to account. Collins and five others were hanged.
In 1864 the prison camp was enlarged with labour coming from the prisoners themselves.
With Sherman driving down to Atlanta it was decided to evacuate the camp but at the war's end there were still 5,000 prisoners still there.
This is not an easy book to read, some of the scenes are quite harrowing. There are times when you just have to sit back and take stock.

AFTERWORD
Henry Wirz was put on trial, after the war, for war crimes and hanged in 1865. It served a purpose of encouraging hatred in the North towards those who had supported and served with the Confederacy.
And in the South they got the message - the war was not yet over.
Posted by Ray at 01:40

Harrowing indeed. I'm an aficionado of the American Civil War due to my dad's passion for the subject and the fact that Alfred Cranmer was wounded at the battle of Antietam.

Thanks Ray. I will remember ANDERSONVILLE.

I well remember reading this one. Thanks, Ray.

I remember how difficult this book was to finish. Horrific descriptions!

It's as fat as War and Peace? That's intimidating. Sounds good, though.

David, Patti and George - in my opinion this book should be ranked as part of American Classic literature.

Evan - yes, it's quite hefty but well worth the read.

Thank you for this post. If I had to name my favorite novel, it would be Andersonville.

I read this amazing, frightening and yes, harrowing book as a young mother in the middle 1960s. I was stunned with the reading, as I'd never even heard of this prison. Nor did I have much knowledge of the civil war. I will always honor my great grandmother, whose home in Ohio was a part of the underground railway. I rank this book high on the list of most important books of our history.