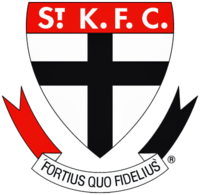 OK - no jokes about the badge.
If I have a sporting passion then it is Aussie Rules Football.
In particular 'The Saints'.
The good thing about Aussie Rules is that there are no rules - well, some but not many.
The game is played on an oval with two goal posts at each end. The goal is made up of four poles. If the ball passes between the outside pairs of post the player scores a point. And six points if the ball goes through the middle posts.
So if the scoreboard reads 2.2.14 it means 2 points plus 12 points = total of 14 points.
That's the game in simple terms and all you really need to know.

St. Kilda Football Club, as such was not formed until 1876 and became one of the founding teams of the Victoria Football Association in 1877. They played at a ground known as 'Alpaca Paddock' near what is now the St.Kilda Bowling Club and St.Kilda railway station.
When they were formed many of the players came from the South Yarra Football Club that had disbanded the year before. Later they amalgamated with Prahan. Their early years were frought with problems both internally and on the pitch. It was a downhill slide to 1879 when they failed to turn up for a game against Essendon. They were relegated to the junior leagues.
But you can't keep a good team down and they returned to the Seniors in 1886.
There were rumblings amongst the powers that be that the VFA was overcrowded with teams which upset some of the top teams. So a breakaway league was formed in 1896 and St.Kilda became the eighth team in the Victoria Football League. Their opening match was against Collingwood.
Team results were good to middling and it would not be until 1913 that they reached their first Grand Final only to be beaten by Fitroy - a team that the Saints had already beaten twice.
They would have to wait until 1966 for their first Premier.
St.Kilda have always been up and down but fair dues more up but just been pipped at the post.
In 1964 they moved from the Junction Oval to Moorabin Oval a good move for the following year they topped the league - a Minor Premiership where the team finishes top after the home and away rounds. They repeated this in 1997 and 2009.
Nor are they short of the silver by winning the 1996 Ansett Australia Cup; 2004 Wizard Home Loans Cup and the 2008 National Australia Bank Cup - all played for in pre-season matches.
The biggest win was back in 2005 when they beat Brisbane Bears by 139 points.
One of the best kickers of the ball was Tony Lockett who played for St.Kilda between 1983 and 1994. In total he scored 898 goals of which he scored 132 in 1992. Of that 132 he scored 15 in one match against Sydney Swans a team that he would later join.
Today he still holds those club records.
Probably the best goal scorer next to Geelong's Gary Ablett.

In 1990 the VFL became the Australian Football League and over the years have added teams from all the Australian states like Fremantle, Adelaide and West Coast Eagles.
West Coast became the first team from outside Victoria to win the Premier.
And there are plenty of teams out there like Hawthorn and Essendon - and the Essendon Bombers had a great player in Michael Long.
But for me The Saints go marching on and despite the ups and downs of the game give value for money.
Posted by Ray at 23:13