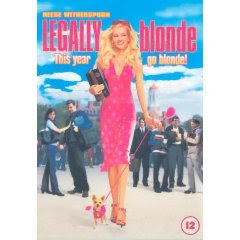 The other Sunday I was wondering what do while waiting for the latest episode of 'Being Human'. I didn't fancy 'Larkrise To Candleford' mainly because I didn't think that it was up to the standard of the last series. So I flicked through the multitude of channels - as you do - and this little gem was being announced.
At first, I thought, oh, a 'Clueless' clone. But I was wrong.

Basic story is about a blonde fashion major, Elle Woods, who goes to dinner thinking that her boyfriend is about to propose to her. He dumps her and says that she doesn't fit in with his family - and family tree. And he's off to study law at Harvard.
With the intention of getting the boyfriend back she enrols at Harvard with the help of a rather sus resume. Elle soon discovers that Harvard is not like College or High School. Elle is out of her depth for a start and then discovers that the boyfriend is engaged to someone else. They shame her by inviting her to a swish party but tell Elle that it is fancy dress. Enter Elle as a bunny girl. (Not sure but which came first - this movie or Bridget Jones?).
Anyway Elle gets her act together along with a pile of law books and a pink laptop.
And impress she does for she finds herself part of the legal team defending an old school friend on a murder charge.

This is a good movie and, for a change, is funny. Pure escapism.
I felt that this movie turned the usual dumb blonde character right on it's head. There is some clever stuff in there and the Perry Mason like ending worked quite well.

Reese Witherspoon is excellent as Elle turning what could have been a cardboard character into a living, breathing person.
I realised that this was the fourth thing that I had seen her in. She impressed as Oliver Reed's child like wife in 'Return To Lonesome Dove'. Just as she did in 'Cruel Intentions' and 'Sweet Home Alabama' - a very underrated film.

There is a 'Legally Blonde 2' where Elle takes on Washington.
Posted by Ray at 23:33

Yeah, the movie wasn't too bad. Better than the sequel, as I recall. Now, though, this thing is on the road as a stage musical (without Reese Witherspoon, of course). The TV commercials we're getting for the local production look horrible.

We liked it too. Also unusual; the sequel is good. Has Bob Newhart in it as well as other delights.

Evan - The musical has opened to favourable reviews in London.

Mr Roy - Bob Newhart one of the great comedians. 'The Driving Instructor' and 'The Introduction Of Tobacco To England' were amongst his best.

Haven't seen it. Passed it up as another dumb blonde exploitation, but will catch it next time around, if it shows at a reasonable time. Enjoyed your review.

Liked it, too. She has a lot of talent. Even playing June Carter. I think they made it into a musical, too.

Whoops, I see you said that in your comments.

We enjoyed this film, too; and the sequel wasn't that bad either. A canny lass, is Reese.

I love this movie! I wanna watch it all over again! :)