Just to show that I am not biased - QUADROPHENIA - is the best (well, it is the only film to be made on the subject) depiction of the Mod culture. 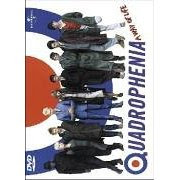 Phil Daniels is excellent in this film and I believed in his character.
There is a great moment when Daniels meets up with an old friend in the public baths. They do some catching up on old times and they plan to go down to the local cafe - that is until the friend emerges in his leather jacket.
This was the way it happened - friends became distanced because of who they were and the culture that they followed.
The film ends with the Battle of Brighton and is, surprisingly, accurate.
The music is from the time with contributions from The Who - though classed as a Mod group, 'My Generation' was played in Rocker Cafes as well.
Posted by Ray at 18:00

Labels: Quadrophenia - The Who - The Sixties - movies

I love this film - the style, the music, the vibe. And isn't leslie ash young and doesn't sting look a knob.

I saw this when it came out, great film.