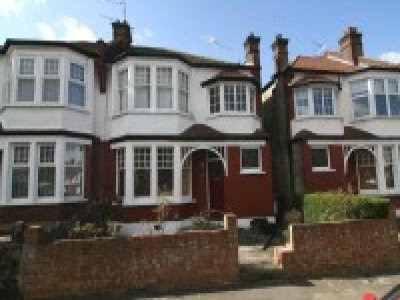 Just thought that I would add one or two things to my last post - and the comments did jog my memory.

The pic is of the house that I grew up in. Nowadays, it is a four bedroom house but when I lived there it was divided into two flats.

The small window to the right (as you look at the pic) was the kitchen. The big bay window was the front room and my bedroom. Then to the rear of that was my parents' bedroom which they shared with my younger sister.

I often wonder if the author Alan Hunter, the creator of Chief Superintendant George Gently, ever lived in my road as he has his creation living in North Finchley and the description of the house he boards in is exactly as I remember the above.

When I talk about my childhood I often err to the brighter side of things but I come back to earth with the memory that I grew up in the aftermath of the Second World War. I could not go to London without seeing the bomb damage - even five or six years on they were still re-building the City.

Rationing was still in force. Despite the shortages somehow or another people got through.

My mum shopped on a daily basis - not like today where we indulge in bulk buying and shove it in the freezer. Even during the blizzard of 1947 my mum went shopping - the snow, so I am told, was so deep that my pushchair was buried halfway. I just imagine myself as a kind of human snowplough.

As a small child I knew nothing of the crisis that blew up in Germany a year later with the Berlin Airlift - but I did become very aware of the Korean War. There was a fear in our house that, despite the existence of National Service, all the ex-servicemen including my dad would be called back.

I recall my mum's fears as we sat and watched the newsreel showing a group of white, arrow shaped missiles. 'I hope those things miss you," my mum said. I said: 'If I saw one of those big arrows coming I'd just roll to one side so that it'd miss me.' No one told me that those arrows exploded and if I had rolled to one side.....

I guess, as children, we more more involved in building on our childhood than worrying too much about what was going on around us.

To see a bunch of kids sitting outside a pub was something that was natural. Parents took their children to the pub and the children would sit outside with a glass of lemonade or ginger beer and a packet of crisps into which they would shake salt from a blue wrapper. Not all parents dumped their kids while they got drunk - it did happen, but for the majority I would see parents attending to their kids. As I went to school with some of those kids it was not unusual to be offered a glass of ginger beer by one of their dads.

That was what it was like back then. People knew each other and they talked to each other.

We played in the street - the sight of a car was a rare thing. But some politician thought that we children should be made aware of a certain danger. So they came up with an advertising idea and a film, aimed at children, about the dangers of taking sweets from a stranger. The very people that this film was aimed at would never get to see it as The British Board of Censors gave it an 'X' certificate.

Blissfully, we played on. I still caught the trolley bus on my own and went down to visit my grandparents. Carried on going to the park on my own and we took sweets from strangers for there was never a hint of an ulterior motive. But, then, most of the sweet givers were the parents or grandparents etc of another child that I knew.

Even as a ten year old I could travel from Orpington in Kent back to Finchley on my own.

Were things differant back then?

We grew up with the radio - from 'Children's Hour' to Jet Morgan and Paul Temple. Most people didn't have a television until the Queen's Coronation - and then it was one channel in black and white and not on 24/7. There was a children's hour from 5pm to 6pm and then a break to 7pm when the grown-ups television began with the Newsreel. The gap was to allow parents to put their children to bed. Television closed at 11 pm with the Epilogue and the National Anthem. Then it was a case of watching the screen until the little white dot disappeared.

Brilliant! Yes, there was more freedom, Ray. I had a small child's bicycle that could be used on the pavements (pedestrian footpaths). I rode miles and miles alone on that cycle, pretending it was my own "bus"! My travels from Durants Park, Enfield, ranged from Tottenham south, where I had grandparents, uncles, aunts and cousins, to Hoddesden in the north, then over the River Lea to Chingford and the Royal Forest Arms (Epping Forest way) to the east, and Potters Bar via White Webbs Lane west. Never once was a I accosted by a stranger. It was, as you say, a very different world.

Gary - I haven't a clue but the wife thinks that it was back in the 1980s and around the time that Breakfast TV came on the air.

Keith - I know exactly what you mean. I used to cycle up to Hadley Woods in Barnet and up to Potters Bar as my uncle lived up there. Who knows we might have crossed paths.