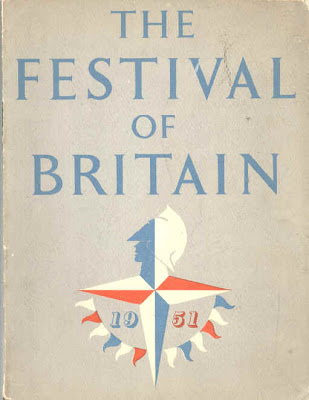 Recollections of my childhood would not be complete without a mention of the Festival Of Britain back in the summer of 1951.
It was a fantastic sight with the newly built Royal Festival Hall almost hidden by the Dome Of Discovery and The Skylon.
It was built on the South Bank of The Thames and replaced the warehouses that had stood alongside the river.
It was built, or so I am told, to celebrate the victory of the Second World War and 'cheer up a despondant people'.
Well, I don't know about that - I was just coming up to 6 years of age.
The exhibition not only looked back at the past but forward to a bright new future. Clean cut kitchens with Formica topped tables and fancy fridges. It all looked good but my mum was very dismissive as it all looked too expensive.
Five years later we would have a clean cut kitchen with Formica topped work services and a fridge.
It is estimated that over 8 million people went to the Festival and, I think, they all turned up on the same hot, sunny day that I was there.
Nearby, Battersea Park had been turned into an Amusement Park and funfair. But for me the high point was the Guiness Festival Clock.
Was it all worth it?
For a child it was an insight into the world that I had been born into - and my mum enjoyed the day out. Only the adults understood what it was all about - but for me it was a day of excitement and awe.
All too soon the site was demolished and here I am, in my later years, thinking what a waste of money it was. Especially, with the news that they want to rebuild The Skylon - should have just left the original in place.
Another building would eventually suffer the same fate - The Shot Tower. This was a relic from the 1850s with a tall chimney like tower where lead was dropped to create shot. It became a casualty to make way for the expansion of The South Bank.
Well, that's progress - and The Festival Of Britain has become like a forgotten memory. Many of the things that we take for granted today - well, kids like me saw it first back in 1951.
Posted by Ray at 08:14