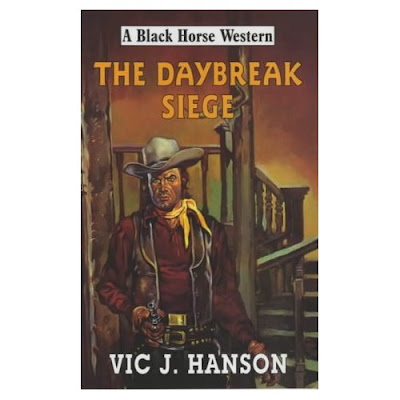 In keeping with the theme on The Tainted Archive blog about Black Horse Westerns - see side panel for link.

Vic J Hanson's first western novel 'Lannigan's West' was published in 1949 and his last is pictured left and published in 2001.
By strange coincidence this was the same book and the same year that I discovered the books of Vic J. Hanson.

On a trip to Orpington I found a copy of 'Requiem For Pilgrim' by Jay Hill Potter. Inside it had been signed by the author but there was another message in it that was signed simply 'Vic'. Bells rang - as they do - and I read a few pages and had just a suspicion. Fast forward another few years and I found out that my first impression was the right one - thanks to an article by Steve Holland. The biggest shock though was the discovery that Vic J Hanson (though a lot older than me) and I had lived in the same area.
Vic J. Hanson has written many stand alone books and it is these that I have read. He did write a series of books featuring a lawman named Amos Crowle - but I had not come across any of those books. I do now just having won one on Ebay.
As Jay Hill Potter he wrote the Pilgrim books as well as stand alones.
Hanson's books are superb - the kind of book that I put in my bookcase because I will read them again. The books read as though the writer has a story to tell and from the outset you want to hear it.
It is strange to think that this writer would be there in ways that I never expected. He wrote Sexton Blake stories; he contributed to Western Adventure Library, Cowboy Adventure Library and Combat Picture Library. He wrote stories for the Edgar Wallace Mystery Magazine (a favourite of my grandfather) and boys annuals - all of which relate to my childhood and youth. He had written detective novels and, when I think about it, his output must have been phenomenal.
His editor at the time was Keith Chapman also known as the Black Horse Western writer Chap O'Keefe.
Vic J Hanson is just one of those Western writers that you have to read - he is certainly one of the best western writers there is and it's just sad that he reached Trail's End.
Posted by Ray at 14:18

A fine appreciation, Ray. Whatever he wrote, Vic had a narrative style that seemed to shine through. It wasn't to all western readers' tastes, but it was a distinctive "voice".

As a contributor to the Micron pocket libraries, EWMM, the Sexton Blake detective series and the Odhams boys' annuals, he was always willing to please. I can remember asking him to write scripts to match various, hard-to-fit generic western covers from Spanish artists -- one featuring a bunch of ghost riders, skull heads, flowing, shimmering robes, the lot. Vic obliged perfectly.

Another time, when I was up to my ears in work at Micron, I was asked by an agent to supply scripts for a Saint comic book. I wrote one or two myself, Vic stepped in and supplied others.

His innings was a long and good one!

I agree with Keith - a great post. I'm new to this writer but will be seeking his books out. And thanks to the nod to my own article.