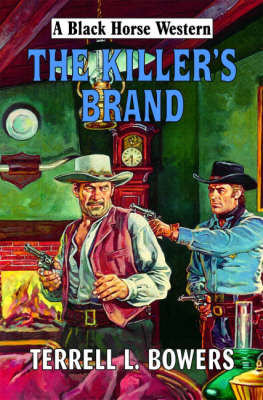 Cover for just published novel - 2008 - Black Horse Westerns.
I know very little about this writer except that he was born Laporte, Indiana in 1945.
What I do know is that he has had books published with Avalon, Leisure as well as Robert Hale's Black Horse Westerns.
Looking around the net it appears that there is no information about him apart from an impressive bibliography.
Nor has anyone appeared to write about Terrell L. Bowers and, maybe, I'm not the best qualified to do so - but I'll give it a go.
I first came across Terrell L. Bowers when I borrowed 'The Banshee Raiders' (Hale 1984) from the local library and was impressed by his writing style - it was easy on the eye and the mind.
When I came across a copy of 'THE PETTICOAT WAR' (1985 - Robert Hale) and read the blurb and came to the part that said: "But he couldn't turn his back on a town full of defenceless women and children. His one chance to turn his Petticoat Army into an able bodied fighting force' my immediate reaction was - The Magnificent Seven Ride.
Except that this book is not a reworking of the themes from that film but a well structured story the deals with good and evil.
Marc Kannon is a man on the run after killing a Mormon in self-defence. On his trail is U.S. Marshall Nate Child's, also a Mormon, who never gives up until he has caught his man. Added to the mix is that Kannon fought for the Union and the town of Rio Diablo is full of Confederate die hards. Sounds all straightforward - but Terrell L. Bowers builds his book with interesting characters like the bandit leader Paco Basada and Marc's brother Steve who is a member of Basada's gang of outlaws. Steve and Marc are chalk and cheese - but they do care about each other.
Where Terrell L. Bowers strength lies is in turning ,what should be a traditional western, into something else. What appears to be predictable doesn't happen or if it does then it does in a way that you didn't forsee.
In 'DELRYAN'S DRAW' (1986 - Robert Hale) gambler Delryan wins an Indian, mute slave girl who turns out to be white. As he doesn't want her he gives the girl, Capricho, her freedom but she doesn't want it
Into the mix is Faro Link, Capricho's former owner and an army scout, Short Change, who thinks that the girl can lead the army to capture Jutemayo a renegade Indian.
Delryan is caught in the middle and there are those who want him dead. The pace just doesn't let up and the reader (well, this reader) wanted Delryan to survive.
Terrell L. Bowers, in my opinion, has gone from strength to strength with books like 'YANCY'S LUCK' (2002 - Black Horse Westerns) where a simple job for Yancy Nodean's mission to clean up Pine Junction is anything but that easy.
Terrell L. Bowers is one of those writers who should be better known - and I can only guess at his influences - but he could stand with them and some of his better known modern contempories.
Posted by Ray at 08:55

I share your appreciation of the Bowers books, Ray . . . as well as a similar ignorance of the author's background. The best I could up with was a Hoofprint I ran in the March 2007 Black Horse Extra. It does mention a few influences. Take a look here:
www.blackhorsewesterns.com/bhe5

Yes, you're right - I trawled the net for some update information. Somehow I managed to forget to go to Extra. And I sat there racking my brains trying to recall where I had read about Bowers. I think it might be a coup if someone could get an interview with him...?