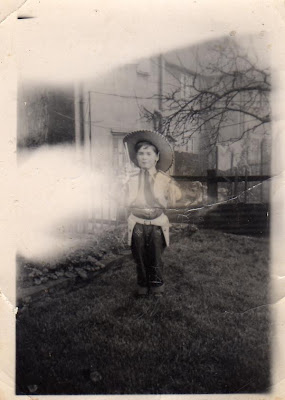 If they only knew......I was about 5 or 6 when this photo was taken in my grandparents back garden.
Even as a child I lived and breathed all things to do with cowboys.
My mother made the vest in this pic but I'm holding a pair of Chad Valley Colts.
Another thing that I'm reminded of is that the outfit was made after meeting Gene Autry at Harringey (North London).
Like all kids I wanted to be a cowboy when I grew up - well, there you go.
Our first home was a small flat in North Finchley and my bed was in the front room tucked behind the settee. Later, when we got a black and white television, I would lie upside down and watch things like 'War In The Air' and various plays.
In those days they either showed a play from the West End or a good drama. Unfortunately, my upside down antics were discovered and I was banished to my parents' room until they came to bed.
Watching these plays not only stimulated my imagination but made me wonder if I could become an actor.
Yes, I made it on to the stage at St. John's Primary School's production of 'Rumpelstiltskin' where I played a soldier along with two friends Raymond Marsh and Philip Snow. We always hung around together but that appearance was to be the last for us. The following Easter Philip was killed crossing the road outside the Tower Of London. Ten years later on August Bank Holiday Monday Raymond died in a motorcycle accident.
In 1954 we moved from North Finchley to Orpington, Kent where I found myself being cast in lead roles in the Warren Road Primary School plays. It was when I was in 'The Pied Piper Of Hamelin' that I added something new. The teacher wanted a narrator to introduce each scene but there was no script. So I took the role of narrator and wrote my own lines - much easier to learn.
And that concludes my acting career. I found that the writing was far more interesting.
I learned to read at an early age - in fact I was reading before I arrived in Primary School - and was to produce a kind of rebelliousness in me.
On the classroom wall was the alphabet and with it a picture of an item that began with that letter. We were taught A is for Apple etc and every day we repeated it all by rote. Then we had to do it child by child. The teacher would point at a letter and asked a child what it stood for.
Teacher to me pointing at the letter 'H': What word begins with that letter?
Me: Hoop
Teacher (pointing at picture): No - it's horse.
Me: But, miss, hoop begins with H.
Teacher: It's horse. That is what you are supposed to say.
Me: Hoop begins with an H.
Teacher: Yes, it does but that was not the answer that I wanted. And if you are going to argue with me you can stand in the corner.
I learned one thing - how to rebel but I didn't realise it then.
The first book that I bought was Pat Reid's great escape book 'The Colditz Story'. Still have that book though the pages are fragile, browned and the spine reinforced with black tape. It cost me two shillings (10p) and weeks of going without sweets etc. I didn't lose out on my 'Eagle' comic as my dad could see that I was making an effort to save so he paid for the comic.
In those early childhood years books and comics were the main stimulation. Those and Saturday morning cinema at the local Odeon where we would get a cartoon, a serial and a movie (more often than not a cowboy film). We would come out of the cinema having a shootout or swashing an invisible blade as we emulated Zorro.
Later, I would find a kind of de ja vous when the BBC followed the news with a cartoon, Doctor Who and a Western.
Back in the fifties I was already watching 'The Lone Ranger', 'The Range Rider', and 'The Cisco Kid'.
Our local park, commonly known as The Sandpits, catered for children by building a wooden stockade for the boys and a playhouse for girls. The fort was built close to an area of the park simply known as 'the bog'. This was a muddy, marshy place hemmed in by trees close to the pond where we fished for newts and sticklebacks and stuck them in jam jars. The bog was the fort's weakness for we could creep up on the occupants from this side and they just wouldn't know we were there until we were inside.
Great days - but therein lay the building blocks that would shape our lives.
Posted by Ray at 08:48

An excellent post Ray. I thoroughly enjoyed this. Reading this I'd say your about 15 years older than me but we have a lot in common and my childhood was very similar in that I loved the westerns and would spend as much time in the cinema as I could afford, often collecting old pop bottles to get the money back on them to pay for this. You met Gene Autry - wow! I've got some old Gene Autry comic books.

Thanks for that reminder, Gary.
You mention picking up bottles - we did that - tuppence each or thrupence for a Tizer bottle and collected newspapers.
As for Gene Autry - I was so gobsmacked that I never said a thing. Mum did all the talking.

LOL -Gene Autry must have seemed huge to you. Yeah we got 8p per empty pop bottle from the Corona factory down the road.

Ray, I agree with Gary -- this is a great post and I do hope you'll do more reminiscencing. Great photo and how cool to have met Gene Autry! I would have been speechless too... It's amazing how much more you could experience back then: a cartoon, a serial and a movie. A matinee for my wife and I just the other week cost almost $20 for the movie, a tiny bag of popcorn and soda.

Great reading Ray, has definately made me think back to my early years.
Catching newts was something I loved to do, caught a five legged one once.
We used to get a cartoon and feature film shown at the local school every Saturday morning - cost sixpence - but sadly they never showed westerns.

Yes, Steve, sixpence bought a lot back in the old days. Zorro usually turned up as a serial - though I think we had a movie as well.
Most of the westerns featured Hopalong Cassidy as played by William Boyd.
Then there were the comics - Hopalong had his own; as did William Boyd - later Gabby Hayes had his own titles none of which had Hopalong in.

David - I don't know how prices compare but $20 in English money is around £10. It cost me more than that to take my granddaughter to see '3:10 To Yuma'. Then we had to pay the over-inflated cinema prices for the goodies.
I just wonder whether the credit crisis affecting the world as a whole will produce a reality check and when we come out at the other end products have a realistic price tag.

Beautifully remembered and recorded, Ray. As mentioned in our emails, many parallels . . . life for a small boy in a small flat in Enfield (another part of North London) was remarkably similar, right down to the Saturday morning cinema shows (exactly the same format) and even the school plays. Look forward to more reminiscences!

Hi Keith - yes, it's interesting when I think about it. There is you in Enfield, me in North Finchley and John Harvey in Muswell Hill (he was born 1945)all growing up at the same time with more or less the same influences - and we all write or wrote westerns.
In many respects children today do not have the advantages that we had or made for ourselves. Today's children know too much too young that they miss out on childhood.

Nice story. I chuckled at the teacher part-- some folks just don't fit in the school 'box' real well. And that's the best part. =)