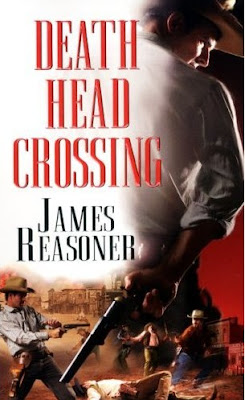 DEATH HEAD CROSSING by James Reasoner was, or so I thought, the first book by this author that I had read. I liked the characters that he had created and that mystery element that pervaded in the book. Not just a western but a detective story as well.
It was not until later that I discovered that that book had not been the first James Reasoner book that I had read.
Now I'm not a fan of the Longarm books by Tabor Evans. I had read the first couple but nothing more until I came across a book called 'Longarm And The Restless Redhead' that I picked up. The sole reason was because I wondered how the author was going to use the title.
The title suggested 'The Case Of The Restless Redhead' a Perry Mason novel by Erle Stanley Gardiner. For my 10p I got a Longarm novel that I enjoyed and there was something differant about the book.
Thanks to Steve M and his Yahoo site Frontier Times I began to learn more about James Reasoner and the fact that he had written under various 'house names' and that there are titles in the Trailsman and Stagecoach Station (Hank Mitcham) series that have James Reasoner's stamp on them. There are, probably, others that I have yet to discover.
James Reasoner lost his home in a devastating fire. Not only is he rebuilding his home and life but is still putting out new books and to me that is inspiring.
Posted by Ray at 22:52

Ray, If you get a chance read Longarm and the Pine Box Payoff by James Reasoner. It's one of the finest books I've read this year and it has a nice surprise ending that you don't always expect from a western. The cover for Death Head Crossing looks cool. I will look for it.

Yeah I've loved all the Reasoner westerns I've read. He does some good crime too.

I appreciate the kind words, guys.

Ray, check out James' website if you want to see exactly which westerns he's written...there's loads to choose from and I've yet to come across a bad one.

And if you haven't read Dust Devils do. One of my favorite books.