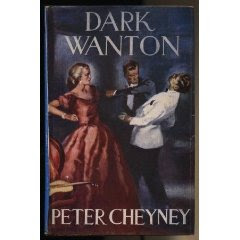 Peter Cheyney was born in 1896 in Whitechapel in London's East End - but it was not until 1938 that he began to write novels. He died in 1951 but in that short writing period he produced quite a number of books and short stories.
Cheyney wrote at a time when PC stood for (apart from his initials) Police Constable.
The interesting thing that I find with Peter Cheyney was that he wrote in different styles. Lemmy Caution is a tough G-Man with an eye for the ladies and a voice of his own. Told in the first person the story is told with a fast, slick patter.
'Slim' Callaghan on the other hand comes across with a liesurely pace as the English private detective solves the problem.
The tone of the 'Dark' novels is stark and, as the titles imply, dark.
'DARK WANTON' is the setting for a story set just after the Second World War and the Secret Service has 'mislaid' two lists of German war criminals. Peter Everard Quayle is the head of the Department concerned and he was responsible for the compilation of the list. Instead of handing the job over to one of his agents he decides to call in a group of people who had operated behind enemy lines during the war.
Michael Frewin appears to be too dapper and a bit of a fop. He is Quayle's second in command - but outward appearances are deceptive for he is a cold blooded killer.
Antoinette Brown, known as the Practical Virgin - elegant, sexy and not interested in men - but she is a problem solver. Her task is to recruit Aurora Francis, former agent and ex-girlfriend of the agent that Quayle wants to draw back to the organisation.
The former agent is Anthony Keirnan - a sauve debonair chap who has hidden depths.
Peter Cheyney fills the book with secondary characters - some who die while others pass through and leave their mark.
The final revelation does come as a surprise.
There is something about the Dark books that suggest the natural successor would have been James Bond.
Cheyney died in 1951 - James Bond arrived in 1952.
Posted by Ray at 22:24

Thanks, Ray. Another new name.

I'll tell you this: I just reviewed Spenser's first book for today's Forgotten Books. The dust jacket mentioned that Spenser is Boston's answer to James Bond. I didn't see it that way at all. But I see it here. And with the dark qualities of this book and the graphic and dark nature of the original Bond novel, Casino Royale, I can certainly see the connection.

Ray, Would you say he writes similar to Ian Fleming? The reason I bring that up is because I'm reading an early Saint novel and Leslie Charteris reminds me a lot of Fleming. Its a very effortless polished style I enjoy... Thanks for bringing to my attention a new writer.

These are great - much like the Bulldog Drummond series. They don't write em like they used to.

I've never heard of this writer. Thanks!

David - I can see a connection with the 'Dark' series. Fleming's Casino Royale and Moonraker have moments when I think 'Cheyney'.
In many ways I think of Peter Cheyney as a 'forgotten author'.
Maybe, he'll get a revival via the 'Hard Cases' imprint - I hope so.
Sorry for the slow response but I decided to go walkabout for a couple of days.

No problem and I hope you had a relaxing weekend... I will be looking for Cheyney.

I've read a few of the Slim Callaghan novels and really enjoyed them. Haven't tried any of the Dark books, but I picked up one of them the other day at a used bookstore. DARK DUET, I think it was.

I've always trouble reading Cheyney's book. I find them boring, silly and not very well-written. Lemmy Caution is one of the worst (or actually baddest) male chauvinists in the annals of crime literature and I shudder at the thought of him flirting with women, which he does with staring them outright and not saying anything. Huh? What's wrong with him?

Juri - part of the appeal of Lemmy Caution, when I was growing up, was what people term as male chauvanism today. It was a part of Caution's persona and not far removed from kids looking at pin-ups.
In 'Dark Wanton' there is a similar scene where it is a woman looking over a man in exactly the same way.

Cheyney's earlier plots and characters could be described as a little one-dimensional, but they certainly became more complex as the books went on. The Dark books were some of his last and best, and definitely set the scene for Bond. Check out the Peter Cheyney website at: http://www.petercheyney.co.uk/