MARSHAL OF GUNSIGHT by Elliot Long 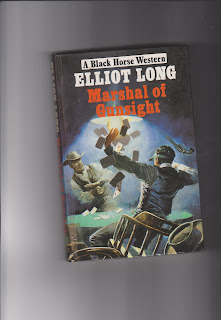 Does anyone remember the first western that they read?
In this case I will be recording the first four Black Horse Westerns that I read.

Tom Callan had worked with some of the best lawmen. He was with Wild Bill Hickok in Abilene, then Bat Masterson in Dodge and, finally, the Earps in Tombstone. Now he was just the Town Marshal in a backwater called Gunsight.
For three years he has not had much to do except twiddle his fingers, play poker with the butcher, Charlie Hannam, and the saloon keeper John Byett.
One snowy day the telegraph sends a message - a couple of small time stage hold-up men are heading his way. Callan knows them so it looks like an easy arrest as it has been in the past. Unfortunately, they kill a man on the way and fearing the rope decide to resist arrest.
The shoot-out has an effect on Tom Callan who fears that his nerve has gone - the killing just does not sit easy with him.
Calming his nerves with a glass of whiskey and a hand of poker - another incident lands in his lap. This time it is a kid on the prod but Blue Marson is quickly disarmed and sent packing. Only this kid isn't used to being insulted and turns around for another go and winds up dead.
Trouble is Blue Morson has a pretty powerful daddy, Jerome Morson, who doesn't take kindly to people killing his boy. And when he and his outfit are run out of town by Callen, Morson is a man fit to explode.
Thinking that he has seen the last of Morson, Callan takes time to help out the County Sheriff but on his return finds that his town is in Morson's hands.

Elliot Long writes a well paced book and creates fine characters. Discovering how Callen deals with his problems adds to the suspense.
Probably one of my best selections on visiting the local library.
Certainly a writer to look out for.
His latest BHW 'Scar County Showdown' is due for release at the end of February 2011.
Posted by Ray at 00:44

To be honest, I can't remember what was my first western. Likely something by l'Amour, though I can't be certain which.

The Sackett novels are particular favorites, so may be one of them.

Scar County Showdown is one of the books Hale has brought forward and is out this month.

Ray when was your first BHW published then?

My mother read Riders of the Purple Sage to us boys before we were in school. Otherwise it was a pulp western mag after we had learned to read.

Steve - I didn't know that. Amazon says Feb so I may get a surprise in the post.

Gary - The first JG BHW was 'The Man From Labasque' in '85/'86. Don't forget that these are the first four BHWs that I remember reading.
The first three books published '84 were by Robert Hale so pre-BHW

Ray, it was probably Shane - at school, as it was on the curriculum.
Nik/Ross Morton