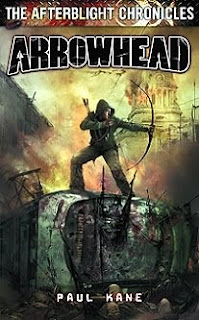 Arrowhead by Paul Kane was first published by Abaddon Books in 2008.

As part of the Afterblight Chronicles this is another story where the world has been wiped out by a virus with the exception of those with O Neg blood.

The book opens with the torture of Thomas Hinckerman who has arrived in Calais with two friends Gary and Dan via the Channel Tunnel. Here they meet a bunch of mercenaries led by the power hungry and sadistic De Falaise. Upon discovering the situation in Britain the Frenchman sees a way to seize power.
Meanwhile, across the Channel ex-policeman Robert Stokes is watching his wife and son die of the virus. This contains some very harrowing descriptive writing. As Robert Stokes waits to die he becomes a hermit in the woods near Nottingham (where he lives).
But slowly he comes to realise that the virus has passed him by and he begins to live off the land. He makes his own bow and arrow with which he practises until he can hunt for his food.
While all this is happening De Falaise is creating an army who, on hearing of a certain myth and legend decides to set up camp in Nottingham Castle and declare himself as the new High Sheriff of Nottingham.
Ah, thinks 'Survivors' meets Robin Hood.
Yes, that's what I thought - but there is more to this tale than just that. Sure there is the Reverend Tate (Friar Tuck), Jack 'The Hammer' Finlayson (Little John) and Mary Louise (Maid Marion) who bursts onto the scene with a pair of replica Peacemakers.
This take was one of the best that I've read in a long time and has the kind of pace that keeps the reader in touch with the characters through all the twists and turns.
There are two sequels in this series - 'Broken Arrow' and the just released 'Arrowland'.

One thing did leave me a little bemused and it must be a coincidence - De Falaise picks up some of his army in FINCHLEY, Mary Louise's surname is FOSTER and she has a pair of PEACEMAKERS (westerns). See where I'm coming from?
Posted by Ray at 00:19