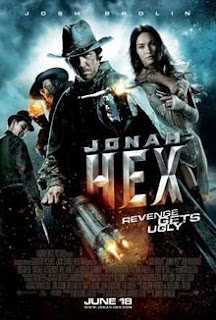 Yes, well what can I say.
The movie does carry the spirit of the comics and the opening sequences that explain how Hex became disfigured are neatly done.
Anyway, Quentin Turnball (John Malkovich in Cyrus The Virus mode - Con-Air)is the baddie who kills Hex's family and creates the artistry on Jonah's face. Hex (Josh Brolin)becomes a bounty hunter and one who has a bounty on his own head. He has a neat pair of gatling guns on his saddle with which he wipes out a town that has decided not to pay him. Almost a spaghetti western parody.
Anyway to cut an 82 min movie shorter - President Grant offers a pardon to Hex if he can stop a gang from causing mayhem. A gang run by Turnball who had, earlier, faked his own death.
Turnball has a brilliant number two in the shape of a tattooed Irishman called Burke (there is a touch of The Riddler here). Michael Fassbender breathes so much into this character that he stands out.
With the help of the love interest, a prostitute named Lilah (Megan Fox) Hex goes to war in search of a weapon of mass destruction.
As it stands 'Jonah Hex' wasn't disapponting but could have done with some extra scenes just so that characters could really develop. Maybe they will do better with the sequel.
Posted by Ray at 00:52