THE MARK by Charles E Israel 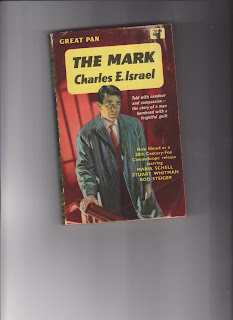 I first read this book when it was a pristine straight off the shelf paperback in 1961. I didn't have a clue as to what the book was about. The blurb on the back just stated "Here is an adult novel that demands to be read.....a masterpiece of suspense that makes every word count."
Not enough for a young teenager to guess at what the book was about.
Still the best way to find out was to start at Chapter 1.
Jim Fuller (the hero) is in a diner. He's a touch nervous as he has to go see a room that he wants to rent and then go on to a job interview. He is nothing special, just an accountant looking to relocate but the blonde waitress hovering around him increases his tension.
By the time he gets to the Cartwright house where he intends to rent a room he is a little more settled. He likes the room but not the 'Blue Boy' painting on the wall - that brings back memories and not all of them good. When he meets Arnold Cartwright, the landlady's husband, Arnold thinks that he recognises Jim from somewhere.
It is not until he gets to his job interview with Mr. Clive of Clive Industries that the reader discovers that Jim Fuller has spent the last five years of his life in the Pen.
As Mr. Clive doesn't ask the important question Jim Fuller does not tell anyone what he was inside for.
But you should have worked it out by the time he meets up with his shrink, McNally, in Chapter six.
This is a dark book that is pieced by rays of hope. Each revelation comes as each layer of the story is uncovered. But just as you reach the point where all looks well for Jim and his relationship with secretary, Ruth Leighton, his world comes crashing down to reality.
There is no escape - or so it seems.
This is a book about abuse - and the victims - but told without sensationalism.
Fifty years on the subject matter is as relevent today as it was when this book was first written.

Stuart Whitman was nominated for an Oscar for his portrayal of Jim Fuller in the movie of the book. The film also starred Maria Schell and Rod Steiger.
Posted by Ray at 15:23