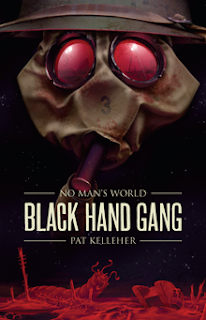 'Black Hand Gang' is the first novel in a series created by Pat Kelleher under the collective name of 'No Man's World'.

It is The Somme, France 1916 and the men of the 13th Battalion of The Pennine Fusiliers are preparing for an assault on the German lines at Harcourt Wood. The assault is destined to take place on the 1st November but when they go over the top the world has changed.
The muddy expanse of their lines and the cratered no man's land is there but is a blot on an otherwise perfect landscape.
How did they get there?
Well, nobody knows but as the story unfolds there are dark occult forces at work. It is one of their own who is looking for the same thing as Aleister Crowley - to become The Great Snake. Although this character makes fleeting appearances Lieutenant Jefferies makes his presence felt.
Still the gallant troops have other things to contend with like a pack of giant hyenas and meat eating worms that have no respect for trench defences.
Along with the Pennines are three nurses, a Sopwith bi-plane and pilot, and an ironclad.
A patrol is sent out and discover a human tribe called Urmans who, in turn, introduce our heroes to the insect rulers of this world the Khungarrii.

Pat Kelleher gives a good account of trench life and the reader feels the shock and awe as the Pennines face the new world and it's perils. And the main character of Tommy Atkins is finely drawn as an almost reluctant hero.
The blurb on the back has a final description that suggests that this is like the old pulp science fiction adventures and it does have that feel to it.

The next book in the series 'Ironclad Prophesy' is out during July, 2011.