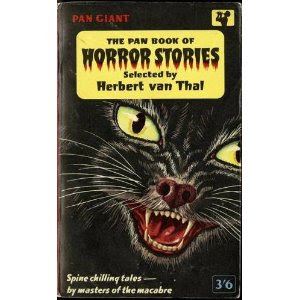 Horror is a genre that spans all genres. Western, romance, sci-fi, murder mysteries - you name it someone out there could spin a horror yarn about it.
Fifty years ago Pan Books produced what would become a thirty year (volumes even) of the Pan Book Of Horror stories edited for the most part by Herbert Van Thal and, from volume 26 by Clarence Paget.
The anthology began with a short story by Joan Aitken called 'Jugged Hare' and ended with '...And The Sea Shall Give Up Its Dead' by Jonathan Cruise. Many authors filled in the years some well known like Robert Bloch, R. Chetwynd-Hayes, Agatha Christie, Bram Stoker, C.S.Forrester and, in later editions, Stephen King - many were not so well known. Plus an appearance in Volume 6 (1965) of a story by John Lennon called 'No Flies On Frank'.
This story also appears in 'Dark Voices' which is a 30th anniversary edition of the original series. The introduction by F.Paul Wilson is pure Lennonist writing. There are introductions to other tales from the likes of David Cronenberg, James Herbert, Clive Barker and Shaun Hutson.
Back in the 1960s it was these short stories that I read at night - the stuff of nightmares that came just before sleep. And I did sleep easy. Even today there are several volumes of horror short stories in my bedside bookcase.
Though I rarely venture into novels I do like the books by Shaun Hutson and Richard Laymon.
When it comes to horror it seems that bookshelves are filled with vampires, zombies, Frankenstein like monsters, haunted houses and the mummy. Although, Richard Laymon touches upon all these things it is when he makes what appears normal to be a scary place.
For example there are a couple in a car heading towards 'The Lake'. The male is remembering the time that he and his female companion first met at College. Then the author pulls the camera back and find that the female is tied into the passenger seat. The conversation, though still normal, takes on a darker hue.
This scene is almost a short story in itself.
One of the new wave of writers - I say new but he may have been around longer - is a chap called Neil Gaiman. I first came across him in an anthology 'Shadows Over Baker Street'. This is a collection of stories where 'Sherlock Holmes enters the nightmare world of H.P.Lovecraft' - and the Neil Gaimen story 'A Study In Emerald' opens up the proceedings. But Neil Gaimen stories can be found in a lot of new anthologies and ranked, on the covers, higher than Stephen King. What I like about this author is that he is a master of the short horror story.
And it was while I was reading Neil Gaiman's story that I recalled the days of 'The Pan Book Of Horror Stories'. Because I think that writing short stories is a darn sight harder than writing a book.
A skill in its own write.
Posted by Ray at 14:54

God call. And the 1st Pan Book Of Horror is to re-released soon!

Yeah, read that there is going to be a Kindle version too.

Used to love that series too and I had one with that very same cover. I think I read on until about 16 before they stopped being quite so good any more.

Thanks, Ray, brings back memories! Yes, like Ian, I had the first book at one time...

You're right about the skills a good, short horror story takes, Ray. Also, the demand for them seemed to fall away in the mid seventies.

In earlier days I wrote several scripts for the the Charlton Comics Group's ghost titles, which included Ghostly Tales, Scary Tales, Baron Weirwulf's Haunted Library and The Many Ghosts of Dr Graves. They were drawn by now-fabled artists like Steve Ditko and Tom Sutton. But at the time I caught up with them as a scriptwriter, these comics, too, were on their way out. To cut costs, Charlton switched from publishing "All New" stories to a reprint policy. As a result, some of the scripts I wrote for them never appeared.

Later, I rewrote one of the scripts, Night Howl, as a text story, but was never able to find a market for it. The setting was too mundane for fantasy; spooky stuff like a pair of were-dingoes was out of fashion; the crime element wasn't sufficiently pronounced to waste time and money mailing it to the mystery mags.

Recently I came across the text version again, renamed Outback Gothic, while moving computer files. Reading it after many years, it did seem nicely retro and of a kind with the cover for the new Beat to a Pulp print anthology, which is what had jogged my memory. (The boxer depicted does have a werewolf look!) So I emailed it to David Cranmer for the online BTAP.

He said, "Loved it! Especially that ending... I've put Outback Gothic down for October 31st. The week of Halloween sounded like a perfect slot."

Hope you'll enjoy it, too, Ray.

I agree - writing shorts can be harder than writing a novel. Definitely more difficult to structure. Great post by the way