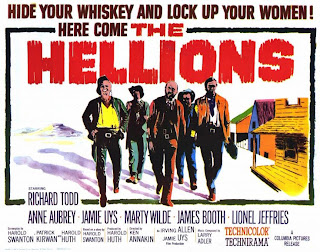 Luke Billings (Lionel Jeffries) and his family have a problem with the new police sergeant Sam Hargis (Richard Todd) so they take over a small Transvaal town with the attention of drawing Hargis into a showdown.
Hargis tries to get back up from the townsfolk who do not want to know, so is forced to lay low.
As things get out of hand one of the Billings boys takes an interest in the storekeeper's wife, Priss Dobbs (Anne Aubrey). Having had enough her husband, Ernie (Jamie Uys) takes up the gun and heads down the main street alone. An act that prompts Hargis to join him. Slowly, the townsfolk turn up to back them up.

This is a great 'western' set against a South African background.
From the above it would be reasonable to see the plot of 'High Noon' with the Clantons. Fair comment and might explain why it appealed more to American cinemagoers than the British.

James Booth who plays the eldest of the Billings boys, Jubal, is excellent with his soft yet menacing voice. It is interesting that Henry Hook's character and dress style in 'Zulu' owes something to Booth's Jubal.

This film marked the debut of one of Britain's pop idols, Marty Wilde (father of Kim), as John Billings and gives a credible performance.

Unfortunately, this film has not appeared on TV, video or DVD and I think that it is about time that was addressed. The British Film Institute makes a claim that it is concerned with bringing back forgotten movies - well, maybe, as 'The Hellions' was made forty years ago a release on it's 50th Anniversary would be a fitting time to issue the movie on DVD.
Posted by Ray at 14:24

As big fan of Marty Wilde on my search for "THE HELLIONS (1961)" film I came across your comments regarding the film not available on DVD. Well I think I have found a site. www.lovingtheclassics.com/hellions.html available on DVD for $14.99.

In there FAQ on the site they say they are collectors, not retailers, and offer this service to help classic movie fans build their collections.Fees cover cost of materials, film transfer times, postage and handling. They say they are NOT selling the movies, but they charge for our time to transfer the films, package them and send them to us.

Although I would like to purchase this DVD and they accept all major credit cards. I am a bit concerned they state they "do NOT accept Paypal due to their terrible reputation!" which is opposite to my experience.

I hope you find this comment useful. If you decide to try this site and you are successful on you purchase please could you leave a comment, I would be very interested.

I saw this on cable and it is on YouTube.