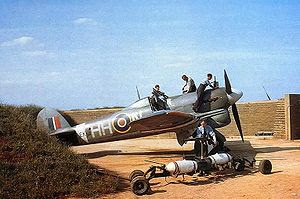 I don't usually get political but -
So there was the British Prime Minister David Cameron standing in front of an audience of service personnel from the Army, Navy and Air Force attempting to explain why the defence cuts were necessary.
A Harrier pilot wanted to know about his future as the aircraft that he flew was going to be decommissioned.
David Cameron, looking all intense and serious said that it was necessary to save the Typhoon as it was doing a good job in Afghanistan.
Well, to be honest, I wasn't aware that the Hawker Typhoon was still in active service. I mean this is a vintage Second World War aircraft - not a modern jet like the Tornado that does see a lot of action in Afghanistan.
Just so that Mr.Cameron, who must read a lot of Commando comics, knows what a Typhoon looks like I've added a picture.
Posted by Ray at 01:02