THE CAMP ON BLOOD ISLAND 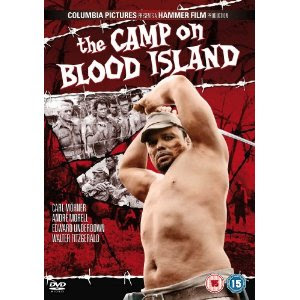 The Camp On Blood Island is one of those movies that has never been released on video and rarely been seen on TV.
Now, at long last, the movie is now out on DVD and is presented in an uncut version.

The Camp On Blood Island was being filmed as 'The Bridge On The River Kwai' was released. And while the 'River Kwai' was a sanitised version concerning P.O.Ws held by the Japanese - 'Blood Island' was based on a true story and had a factual basis. Criticism branded 'The Camp On Blood Island' as over violent and sensational.
Despite this Lord Russell of Liverpool, whose book 'The Knights Of Bushido' about Japanese War Crimes, fully endorsed the movie.

'The Camp On Blood Island' was made by Hammer Films with backing by Columbia Pictures. It stars many of the stalwarts that would make their names with Hammer's horror movies. Andre Morell, Barbara Shelley, Edwin Richfield, Geoffrey Bayldon and Michael Ripper.

The film is set in Malaysia at the end of the war. It opens with a scene of a British soldier digging a grave - his grave. Prisoners of war look on as the Japenese gun him down.
The Commandant vows that should the Japanese ever surrender then every prisoner would be killed.
Attached to the men's camp is the women's camp.
In order to stay alive the prisoners in both camps have to prevent the Japanese from discovering that the war is over.

Both the original posters and the cover of the DVD shows a Japanese soldier with a raised sword. This executioner was played by a professional wrestler Milton Reid.
The Japanese soldiers were waiters from London's Chinatown who were hired as extras.

Today the movie might seem tame and branded politicaly incorrect - in fact, if that term had been in existence back in the late 1950s when the film was made, was the attitude of the film's critics.
However, my opinion is that beneath the drama what happened in those camps was the same as Lord Russell depicted in his book.

'The Camp On Blood Island' was released, uncut, on the 4th October 2010 along with the Stanley Baker movie 'Yesterday's Enemy' and Oliver Reed's 'The Damned'. Two more Hammer movies that have not seen the light of day for many years.
Posted by Ray at 13:32