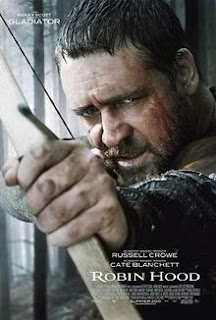 This is the 2010 Ridley Scott/Russell Crowe take on a traditional bit of British folklore.
Actually, it's not.
This version is like a prequel and an alternative history story.

On the plus side this movie is a good old actioner with Robin Longstride choosing to impersonate Robert Loxley in order to return the crown to King John and Loxley's sword to it's rightful owner. In doing so he learns about his own past and gains an identity.

However, this is one movie that demonstrates what happens when a writer does not fully research his subject.
The opening scenes shows the death of Richard The Lionheart years before his actual death.
Robin Longstride plans to jump ship at Gravesend. So it seems that the movie jumps from the 12th Centrury to the 17th without our hero aging. Okay, pendantic - but the village was named as Gravesham in the Domesday Book. Changed to Gravesend because of the plague pits in 1665 - that was the accepted version when I was at school.
Then the French invade England. D-Day all over again as the Norman army leap from landing craft under a barrage of English arrows. If my memory serves me well the Battle Of Hastings pre-dates the action in this movie.
Finally, King John now at the mercy of the Barons decides to burn the document that would form Magna Carta. I would get an angry response if I ever wrote a story that had someone ripping up the American Constitution. But Hollywood has managed to do just that for that American Constitution used Magna Carta as it's framework.

Who cares about Russell Crowe's accent? He made his character come to life but then he has rarely disappointed (personal opinion).
ROBIN HOOD had the potential to be a far better film than it is - it is just the lack of attention to detail that let it down.
Posted by Ray at 21:42

Yeah, I knew this was bad history - and bad legend - but I still enjoyed the movie. I thought it was a gutsy move to change the story so drastically. But you're right, of course, it could have been better.