A FISTFUL OF WESTERNS 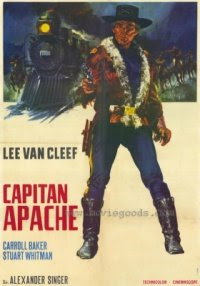 As Hollywood began to draw rein on the Western so it's place was taken by a mass of spaghetti westerns.
The first western to be shot in Almeira, Spain was 'The Savage Guns' which starred Richard Basehart as Steve Fallon, a wounded gunfighter who is taken in by former Confederate soldier, Mike Summers and his wife Fanchea (Don Taylor and Paquita Rico) who own a small ranch. While Fallon is convalescing up turns bad guy Danny Pose (Alex Nichol) who works for the local land grabbing rancher, Ortega, (Jose Nieto). After a shootout Pose runs away and Ortega takes over things. But when he hears a rumour that Fallon has been killed comes back and shoots Ortega and takes charge. What has actually happened is that Fallon's hands have been crushed under a wagon wheel (shades of Django there) and the final shoot out commences.
'The Savage Guns' is believed to be the first spaghetti western with it's use of location and levels of violence.
OK - hold that thought because I will return to this movie later.
Remember 'Captain Apache' (1971) the spaghetti western where Lee Van Cleef sings? Or for the fact that one of the few Native Americans serving in the American Army gets to bed Carroll Baker before going off to find out who killed the commisioner and what lay behind the dying man's words 'April Morning'.
Another spaghetti western with a cult following is 'A Town Called Bastard' (or Hell, if you want). This had Robert Shaw as The Priest and Telly Savalas as Don Carlos and Stella Stevens promising to pay bounty on the man who killed an old priest.
Just three movies classed as 'spaghetti westerns' but they are not Italian.
So, back to 'The Savage Guns', the trendsetter for the spaghetti western.
First off it was made by Capricorn Productions - a company formed by the film's director Michael Carreras and the film's producer Jimmy Sangster both formerly of Hammer Films. So, in reality, the first spaghetti western was British. So, too, were Captain Apache and a Town Called....whatever the Hell you want to call it.
When people think of British westerns they think of the Kenneth More film 'The Sheriff Of Fractured Jaw' or, can't believe I'm going to mention this, 'Carry On Cowboy'. But the British have made more westerns than a lot of people think.
Two of the Louis L'Amour books to make the screen 'A Man Called Noon' and 'Catlow' were British movies and 'Eagles Wing' was another.
'Chato's Land' which figures in various good western charts was directed by Michael Winner and another British western.
And who else but the British could come up with the idea of having Raquel Welch become some iconic figure strutting her stuff in nothing more than a blanket with a hole in it in 'Hannie Caulder'.
British westerns could be violent affairs as in 'The Hunting Party' where the sympathy lies more with bandit leader Oliver Reed than with richman hunter Gene Hackman who is prepared to kill anything and anyone with his long range rifle - including his wife Candice Bergan.
While the British may not make western movies anymore it should be remembered that it was British money that helped to finance two Kevin Costner movies 'Dances With Wolves' and 'Open Range' the latter having British actor Michael Gambon as the despotic rancher.
So there you have it a glance at a fistul of British Westerns - some good, some bad and some downright ugly but that depends on an individual point of view. Whichever way you look at it the British had a go and that has to mean something.
And if a British film maker passes by this blog and thinks it might be a good idea to make another Brit Western then there are a hell of a lot of Black Horse Westerns to choose from.
Posted by Ray at 11:50

Captain Apache and Hannie Caulder I've seen , the rest no. I shall see what I can do, if anything, to change that.

Correction:
I just noticed A Town Called Hell on one of several compilation DVDs I own that I've been gradually working my way through.

Enjoyed reading this Ray, and let's hope there will be another British made Western someday.

Randy - at the moment you have a better chance of finding some of these movies than I have. Must invest in a multi-region dvd.
'Catlow' is on TCM next week.

Steve - with a lull at the moment a few good Brit westerns would not go amiss.

I can't believe I have never heard of these. I am a huge western buff- however I read more western's than I watch. There are times, however when I read a great western and imagine what that book would be like made into a movie(just finished reading "The Shopkeeper" by James D. Best
and would love to see this made into a movie). I am going to try finding out more about Captain Apache- so glad I stumbled across this site.