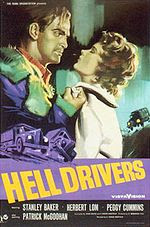 Written and Directed by Cy Endfield
Cast:
Stanley Baker as Tom Yately
Patrick McGoohan as 'Red' Redman
William Hartnell as Cartley
Herbert Lom as Gino
Peggy Cummins as Lucy
Tom Yately has just been released from prison and is looking for work. He turns up at the gates of Hawlett's Trucking Company and is directed to the manager, Cartley. Tom has not got the necessary paperwork but Cartley is not interested in protocol as he needs drivers. Instead he sends Tom out on a test run where he is told to put his foot down and when he questions this and worries about oncoming traffic he is told 'Suppose there isn't. Look on the bright side.'
Although Tom tries to keep his head down it is not long before he falls foul of the head driver, 'Red' Redman. While the other drivers are happy to be cronies with the 'boss' one driver, Gino, sides with Tom. Unaware that Gino fancies Lucy, the trucking company's secretary, Tom begins to build a romantic friendship together.
Between these three they begin to realise that Cartley and Redman are on the fiddle.
This is a high speed movie about the early trucking industry where speed was essential.
Many familiar faces turn up as truckers like Alfie Bass, Gordon Jackson, Sid James and a young Sean Connery. Jill Ireland runs the local cafe and David McCallum puts in an appearance as Jimmy, Tom's younger brother.
This film was made before William Hartnell took on the mantle of the first Dr. Who and makes for a nasty character but is knocked into second place by a bullying, menacing Patrick McGoohan.
Stanley Baker and Cy Endfield combined, later, to produce 'Zulu'.
Posted by Ray at 23:55

I've never seen this one, but what a tremendous cast! Many names that were/became very big on the British scene and elsewhere.

Keith - this one is on DVD. Agree, great to see so many stars in action before they were famous.