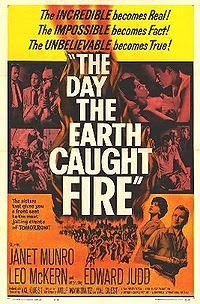 Directed by Val Guest who co-wrote the screenplay with Wolf Mankowitz.

The film opens with Peter Stenning, a Daily Express newspaper reporter arriving at work in a monsoon like downpour. It appears that the weather has changed dramatically and the news editor (played by Bernard Braden in an acting role) sends Stenning down to the Meterological offices to find out what is going on.
There he gets chatting to telephonist Jeannie Craig and a relationship starts.
Piece by piece Stenning discovers concerns over recent sunspot activity that may be the cause of the change in the weather. It is not long before the truth emerges as it is revealed that the USA and Russia have both detonated nuclear tests at the same time and knocked the Earth off it's axis and the new axis is taking the world towards the sun.
As the monsoon conditions are replaced by a heatwave so the gradual decline begins. Water has a price. Anarchy sets in as law and order break down.
The scenes of the dried up River Thames are very effective.
To rectify the situation the Americans and Russians get together to repeat the tests in the hope that the Earth will either return to it's original axis or stabilise things.
This film is a great piece of British sci-fi that is realistic. Also, topical at the time because of the amount of nuclear testing.
The film also has the reporter working for a real national newspaper as well as interiors and exteriors of the Daily Express Building in London's Fleet Street. Arthur Christiansen, the editor of the Daily Express appears in the film playing himself.
Look out for an early appearance by Michael Caine as a policeman directing traffic.
At long last this film is now available on DVD - so guess what I'm getting for Father's Day on Sunday.
Posted by Ray at 09:36

I seem to remember seeing this one. If so, it was a long time ago in those pre-VHS days.

Randy - This one I saw in the cinema when it first came out. I can remember the film but not the girl I took to see it.

Paul - totally agree. I couldn't find anything to verify this but I do believe that the Daily or Sunday Express serialised the story.