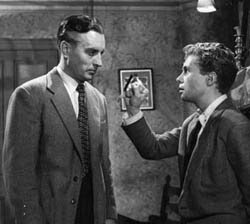 This movie has the distinction of being the first British movie to be given the new X Certificate.

Roy Walsh is a sixteen year old boy living with his mother, Elsie, and his grandmother in a basement flat in Battersea. His father had been killed in the Second World War and his mother struggles with single parenthood. However, Elsie has been going steady with the manager of the local dancehall, Bob Stevens, who has asked her to marry him.
Roy is not looking forward to this because he is quite happy as he is running his gang of juvenile delinquents. He has already been up to the magistrates and been given probation with his mum giving him a character witness by explaining that it was all someone else's fault and that her Roy was a good boy.
To make it look good Roy joins the local youth club and uses it to plan the next criminal caper. While at the club he meets Renee who is not 'that kind of girl' but soon is - she gets pregnant and attempts suicide when Roy reveals his true character.
Meanwhile, back home Elsie is getting ready to marry Bob Stevens. Now he's no fool and is aware of what Roy is like and what he, Bob, is taking on. He is a man strong on discipline which he believes that Roy needs.
To get back at Bob, Roy decides to hold up the local dancehall on wrestling night and snatch the takings. And he's got a gun so when the robbery goes wrong someone gets shot. When he runs away he is convinced that no one saw him - but Bob Stevens, who had just married Elsie, arrives unseen by Roy.
Cornered at home by Bob his new step-son shows all the bravado of a coward. Oh, yes he can - Bob takes off his belt and promises Roy that life is going to get that tough.
The police arrive to arrest Roy but see Bob with the belt. With a nod to Bob they decide that it would be better if they came back later.
This is a film about single parenthood, juvenile delinquency and mugging - this is 1952 not 2009 but the issues are just the same.
There is an early performance in this film by Johnny Briggs an actor better known in the UK for his part in 'Coronation Street' as Mike Baldwin.
This is not on DVD and, in my opinion, is not likely to be. Though it was shown on Channel 4 one lunchtime in the last 10 years. When it was first shown on the BBC back in the fifties it came with the warning that it was not suitable for children so I was sent to bed. Hah -you reckon - not me I came back down, sat on the stairs and watched it through the crack in the front room door.
Whatever else I got the message from that film - so when it popped up on TV I taped it.
The acting is not up to much but the story is good and sound. Some scenes are on You Tube but whether the film can be found online to view I don't know.
Posted by Ray at 13:10