THE GOLDEN YEARS OF ADVENTURE STORIES 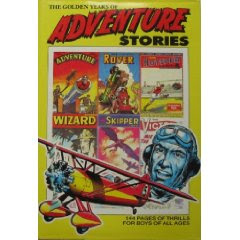 This is a book to take the reader back to the time when comics like Adventure, Rover, Wizard and Hotspur were prose comics rather then strips.
Along with 'Lion' and 'Eagle' comics these were the 'must haves' at Secondary School.
Adventure, Rover and Wizard all began life back in the 1920s while Hotspur and Skipper came along in the 1930s.
Popularity for these comics never waned but the paper shortages caused by the Second World War saw the demise of Skipper.
These comics covered every subject under the sun from athletics with Alf Tupper - The Tough Of The Track in the Rover and Wilson - a mysterious man in black in the Wizard and heroes in football and cricket to westerns with Killer Slade, sci-fi, schooldays adventures and, in the aftermath of the Second World War, war stories featuring the likes of Braddock V.C., The Khaki Tiger, Sniper Dennison and the grey clad 'Deathless Men'.
In the 1960s many of these heroes turned up in strip form in such comics as Hornet, Victor, Valiant and Warlord.
Some of the stories in this book show the transition from prose to strip like Alf Tupper and Braddock V.C.
Of course every comic had an annual but by the 1960s individual stories made it into a paperback series known as the Red Lion Library with such titles as 'Killer Slade Of The Pony Express' by Matt Carson and George Bourne's 'Braddock and the Flying Tigers'.
The Golden Years Of Adventure Stories features the full length first 'Warlord' story called Codename: Warlord.
This book is, to me, a little gem even if it doesn't cover all my favourite stories from back then. But with a history of British comics I guess it would be a difficult task to cover everything.
To drop a hint to those who compile comic compilations I would love to see a complete collection of the prose versions of 'V For Vengeance' one of the best series produced.
Posted by Ray at 11:30

Oh, this is a goody and even more so because many of the comic heroes you mentioned I didn't recognize. What a treasure trove.

Great stuff. Was talking about Alf Tupper recently. Didn't he go blind a guest star in Roy of The Rovers once or twice?

David - This is as you say a treasure trove and well worth a look at what us British kids read.

Paul - I think you are right but Google didn't give a positive answer.

Great story.
Read a great new romantic sporting comedy, entitled Classes Apart.
This is an adult sporting comedy that follows the fortunes of Paul Marriot, the secretary of the Barnstorm Village Sunday soccer team and coach of a school cricket team in Yorkshire, England. The story describes the remarkable camaraderie between the players and supporters of this little club and their desire to achieve success. The team had previously been known more for its antics off the field, rather than their performances on it.

During his time at the club he meets and becomes involved with Emma Potter, who is the sister of James Potter, a major player for their bitter rivals Moortown Inn. Thus, begins an entangled web of romance and conflict. He also begins working at Derry High School, a school with a poor reputation of academic success, where he becomes coach of the school cricket team. Here he develops an amazing relationship with the children and they embark on an epic journey.
www.eloquentbooks.com/ClassesApart.html

Yep, you've mentioned a lot of oldies. Some on here...by them just reading all of these names, will stir up many memories of by gone days.

I'm a full time writer also, all three of the books I've written so far have been adventure stories as well.
All three are Christian oriented as well. I'll leave a link to my latest published book.