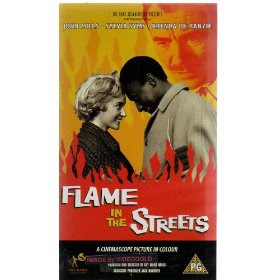 Directed by Roy Ward Baker
Screenplay by Ted Willis
Cast:
John Mills as Jacko Palmer
Brenda Di Banzie as Nell Palmer
Sylvia Syms as Kathie Palmer
Earl Cameron as Gabriel Gomez
Johnny Sekka as Peter Lincoln
This movie was the film adaptation of the 1959 'Armchair Theatre' production of the Ted Willis play
'Hot Summer Night'.
Both the film and the play were written and made in the wake of the Notting Hill riots.
The story centres around Jacko Palmer and his family. Jacko is a shop steward in a local factory and the Union, looking to show some equality, would like to see a black man made up to foreman.
This does not go down well with the workforce who 'won't take orders from a spade'. He makes an impassioned speach on behalf of the proposed foreman, Gabriel Gomez, and wins.
However, on the home front it is a different matter.
Jacko's daughter Kathie is seeing 'someone' and for a while her parents' ignorance is bliss but a nosy neighbour spots Kathie with her boyfriend, Peter Lincoln, a West Indian schoolteacher. This starts the inevitable showdown between Kathie and her parents. Her mother blows her top in a way that leaves Jacko stunned. 'Go on,' she yells. 'Go to your nigger.'
As Kathie leaves so a gang of white boys turn up and bonfire night is going to see some action.
The film has an inconclusive ending and for good reason for it is not an issue that could be tied up at the end.
This movie was fresh at the time and the issues raised along with the language may have been about racism in the late 50s and 60s but cannot be regarded as racist. It is a depiction of a way of life as it was back then.
It is available on DVD but only in a set of eight John Mills films.
A clip can be found on You Tube.
Someone with a sense of humour decided that when this film was released in the US it would be the black and white version while the UK got the coloured.
Posted by Ray at 10:59

Do we make any movies about working men anymore?