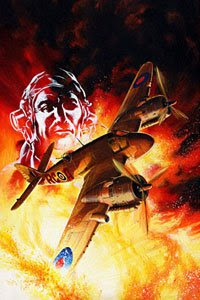 DC Comics have come up trumps and discovered that the 'oldies' are goodies.
Wing Commander Robert Hereward 'Battler' Britton first appeared in 1956 in the 'Sun' comic before transferring to 'Knockout' in 1960.
'Battler' Britton was the creation of writer Mike Butterworth and artist Geoff Campion and the exploits of England's fighting ace of land, sea and air went on to be recorded in Air Ace Picture Library and Battle Picture Library.
Now the Wildstorm imprint of DC Comics is to bring 'Battler' Britton back to life with a five part mini-series written by Greg Ennis and artist Colin Wilson.
The series will see 'Battler' Britton in the North Africa campaign where he is transferred to an American airstrip for a joint assault against Hitler's war machine prior to Alamein.
The writers state that 'Battler' Britton will have to put up with the threats and assaults - and that's from the Yanks.
This sounds like old times - all I can say is bring it on.
The first issue is out on 9th July 2009 and I can't wait for the return of an old hero.
Posted by Ray at 14:58

Your articles about old comic heroes has got me thinking and I've been trying to recall the name of one bloke who was the lead in the comic I used to read as a kid. It might have been Valiant.

The series was set in the 2nd World War and the lead bloke was a huge squared-jawed Tommy who used to every week wipe out whole platoons of German troops who said Achtung a lot. He never of course killed anyone or used a gun but he always defeated the bad guys with a solid punch to the jaw. The final frames always had German troops flying through the air over tanks after he'd dispatched them.

Anyhow, does this ring a bell with anyone?

I can see the pictures. Not sure but Tiger MacTaggart comes to mind.

"Me, too" when it comes to Ray's posts setting up some trains of thought. Fortunately, I have shirt boxes full of copies of the old story papers, the Wizard, the Rover, the Hotspur etc., from those years (the 1950s in my case) and I can read a V for Vengeance serial whenever I want -- or I could if I could find the time!

Ray, my understanding was that the AP/Fleetway digest-sized comic books that featured Battler Britton were part of Thriller Picture Library, not Air Ace.

Keith - Certainly wish that I had kept mine.
I know Battler was in Battle and pretty sure that he popped up in Air Ace - as my son has a story in an Air Ace omnibus.
I split my Commando, Battle and Air Ace comics with my two sons who still buy Commando comics.

Steve and Ian - even as I was writing these pieces other characters were rolling around in my head like Rockfist Rogan and Nightingale Nobbs.

I was going to say Captain Hurricane - I've built up a nice collection of Battle comics via EBAY. Used to love them.

Thanks for the suggestions. Captain Hurricane looks highly likely having just googled him. Those raging furies are familiar, but I can't remember him as being in charge of anyone so I probably was mixing up several characters in one there.